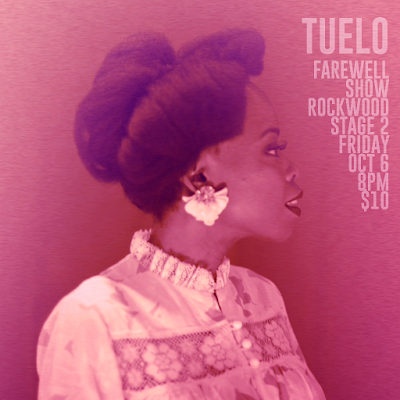 For years South Africa's Tuelo has wowed audiences in New York City. From performing at the Apollo, Joe's Pub, The Late Show with David Letterman, a monthly residency at Rockwood Music Hall, to tours which included stops at The Kennedy Center, the singer and her band have been playing to support the release of their 2015 debut album and 2017 EP, St. Margaret. On Friday night, Tuelo hit the pause button on New York City and Rockwood as she heads back to her native country to see her family whom she has been away from for a decade and record a new album.


Listen to Our South African Mixtape

During a packed performance at the place that became her second home in New York, Tuelo and her band, formerly Her Cousins, played inside Rockwood's Stage 2 to say goodbye in bittersweet fashion. 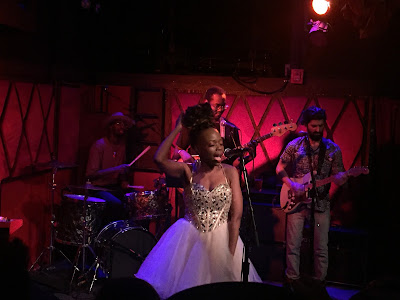 "There are so many familiar faces here," she said while rocking a ballerina dress and silver sneakers. The singer whose voice is a cross between Nina Simone meets Adele with a flair of Joe Strummer's vulnerability thrown in makes her so unique and powerful. We have said it before and we will say it again -- she is the greatest singer in the world. You walk away from her gigs a different person than when you entered. Even the most cynical of critics will have their soul transformed. Tuelo's music is funk, jazz, punk, and traditional South African rhythms combined, which makes room her voice to break through.

In her brief but memorable 45-minute set, she and the band tore through songs like "Run," "Saint Margaret," "Bombs," and the epic closer, "Dreamer," which had the audience dancing and shedding tears simultaneously. 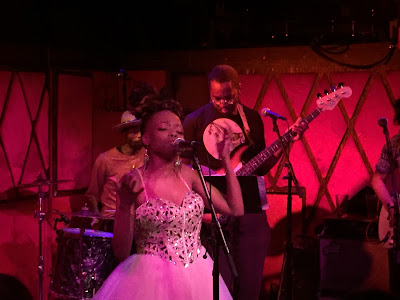 While it is unknown as to when she will return to New York, but the city will seem less eclectic in her absence. We have been spoiled for many years having her perform every month somewhere in town. It is like when The Ramones were at CBGB's in their early days, you knew that at any given time early in their career you could head to the Bowery venue and they would be there. The same went for Tuelo. As she departs for her next adventure in her mother land, we will miss her and all that she has given us and will be ready for her next gig -- wherever that may be. 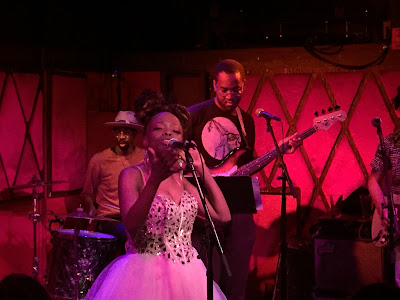 Posted by Salvatore Bono at 7:03 AM