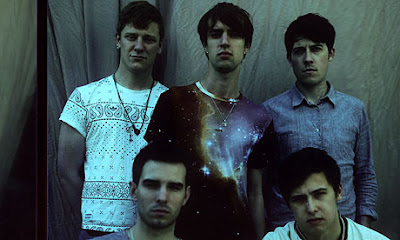 Just last month we picked England's Born Blonde as our Rising Artist. Now, as the new year rolls on, this British band with a distinct influence from The Verve are turning heads even more. Maybe it is because of the massive Stone Roses reunion taking place later this year, Britpop is seeing a revival in a whole new generation of bands inspired by the 90's genre. Bands like Sulk, Viva Brother, The Horrors and of course, Born Blonde. As the band's cosmic and psychedelic sound is catching a buzz back in Britain, it is time to learn more about the band. We spoke with singer, Arthur Delany about the back's backstory, sound and when are they finally going to make it to America.
How did the band come about?
We got together in late 2009. A few of us had already been playing together but a few new songs started kicking around and it just made sense to start fresh. Since then we have always tried to keep exploring and challenging ourselves, you know; keep the forward momentum going.

What made you want to be in a band?
The buzz you get onstage is pretty magical, and we seem to spend all our time in pursuit of that feeling, so it just makes sense for us to be there as often as possible. And because life is too short not to.

There has been much buzz about you over the recent months, how do you respond to the buzz?
It is obviously flattering, it is a particularly exciting time for us, but we are continuing to work hard and trying not to get too distracted.

Now the name of the band, Born Blonde seems to be ironic since no one in the band is blonde. How did the name come up?
We were all blonde once but nothing last forever.

Hailing from West London, do you find the city has an impact on your style and sound?
London is a crazy place to grow up. I think that the real struggle has been to slow down and let everything grow at its own pace; London encourages impatience! I also think that growing up here has inspired us to create our own world. There is so much going on that it forces you to find a space you can call your own.

You have been gaining much attention in London as the cities new house band, what is your favorite venue to play and why?
We have been playing all over London for quite a while. We did a residency at the Troubadour when we were just starting out, so many great names have played there so its got a load of soul. We all live near Shepard's Bush Empire so to do a show there someday is a dream of ours.

There have been many comparisons to your music and The Verve. Do you find the comparisons flattering or a pain in the ass? Were The Verve a big influence on you?
When we are in the studio we try not to think too much about what we are putting down, so all the music we make is the sum of all of our influences. We find a sound that excites us and it hopefully takes us somewhere new.

Your music is very trippy and spacey, do drugs play a role in your songwriting process?
We smoke all the time but none of us inhale...

Because England has such as strong musical legacy, do you ever stop and think how you can or will fit into the timeline of British music?
We don't stop and think really. Thinking about music prevents us from making it so its best not to be concerned with these things. There is no way of saying where or how we will fit in so it is best to just get on with it.

When can we expect a full length from you?
We have nearly finished recording our record but, as with all things creative, it is only finished when it is finished so we are going to take our time.

You supported the Kooks at one point, what was that like?
They've got some mad loyal fans who were a joy to play for. I think it showed us all what we wanted, to make that kind of connection is pretty cool.

Who would you love to play with and why?
We are real admirers of Tame Impala; their record 'Innerspeaker' has been on repeat so I guess they would be up there.

What has been the best thing about being in the band and why?
I think that making this record has been a high point so far. That, and watching our singe 'Solar' gather speed. You spend so much time getting everything ready it is nice to see people reactions.

How would you describe or sell yourself to someone who has never heard of you before?
Give it a listen.

Can we expect you in America soon?
We would definitely hope so. It would be an absolute pleasure.

Is playing America a big deal for you or would you rather concentrate on your home territory first?
Yes its a big deal. Were pretty excited about getting the chance to do so one day but we've got to get our shit all sorted over here for a while first. Its definitely on our list of things to do!
Posted by Salvatore Bono at 8:42 AM