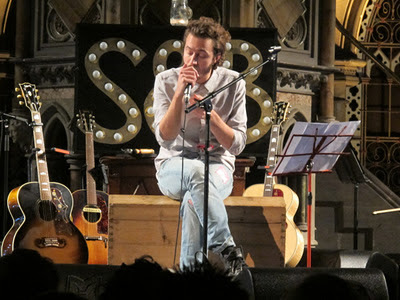 Christmas may be all but over, yet, it is time to discuss what could be one of the greatest records based on the holiday season. This past fall, Tom Smith of Editors and Andy Burrows formerly of Razorlight joined forces and released their debut, Smith & Burrows - Funny Looking Angels. The album has both Andy and Tom doing vocal duties and the duo crafted modern holiday classics on their first go around. While the duo did a small tour of Europe which saw Smith roll right into writing and recording sessions with Editors, Smith took time from his busy schedule for a chat with Officially A Yuppie.
In his only American interview about Smith and Burrows and first US interview of 2012, Smith and I discussed how he and Burrows got together, their songs and of course...some info on the new Editors record. Take a look:
Who approached who to start Smith & Burrows and how did the idea come about to do a Christmas album?
We'd been pestering each other about doing something for a long time, we didn't really know what to start with but to just get into a studio together and see what would happen was the guiding light....So that's what we did! It didn't start as a Christmas record, we just did a couple of covers. I think it was my suggestion to make an album of covers and release it for Christmas after thinking those first two (black and Yazoo) felt a little festive and wintery.
It is a hard thing to do, make a good holiday song without sounding a bit like Wham! So when you were writing these songs, did you think, “how are we going to sell ourselves to the public on holiday tunes and not come across very cheesy?
I like sad songs, Christmas or otherwise. Our Christmas record is a melancholic affair, avoiding the cheese was easy.
“When the Thames Froze” maybe the single greatest Christmas song ever and it is so bleak but also holds much hope. How did it come about? Also, did you think a song with the words “God Damn, this Government, can you tell me where the money went?” would strike a serious chord with listeners around the globe?

Thank you. I've been trying to write a Christmas song for years, I knew deep down that it wouldn't be right for Editors so as this S&B record developed I decided to go back to that seed of the song I'd tried to finish for the last 3 Christmas's. I wanted it to feel classic with that kinda communal hope that next year will be a cracker but also connected to now. Christmastime is generally spend spend spend so it felt right to have a frustrated off the cuff lyric referencing the fact that many many people are skint and don't see why.

You and Andy have such polar opposite sounding voices, how did you figure out who would sing what song? Did it boil down to who wrote the songs?

There really wasn't that much thought or discussion about that. Felt obvious to us for some reason.

Did you write songs for Andy and did Andy write songs for you?
We wrote one song together,"This Ain't New Jersey." "Thames" is mine and "Snowflakes" and Rossyln are Andy's. Although there was much collaboration in the recording, trust too...there were times when we were each working on the others song without the other one of us around.

The tour in support of “Funny Looking Angels” sees you both in clubs but also sees you guys busking to raise awareness, where did you decide what non-traditional places to play?

We had special Christmas Agent Elves booking the shows.

How did the title – “Funny Looking Angels” come about?
It's a cover of a tune by the band Delta. They're an almost mystical band from Birmingham, UK.

“This Ain’t New Jersey” is an interesting song since it is based off the mood one gets after viewing “It’s A Wonderful Life.” Is that one of your must watch holiday films?
Absolutely! That and The Snowman.
Will a non-holiday motif Smith and Burrows record ever happen?

Definitely.
Since I have to ask to please my readers, what are the plans for Editors in 2012? Sounds like you guys are back in the studio, can you give us a bit of an update?
We've been writing all year and start recording with Flood on Monday!! Hopefully out in the second half of 2012.

Photo by Alistair Burns
Posted by Salvatore Bono at 5:04 PM