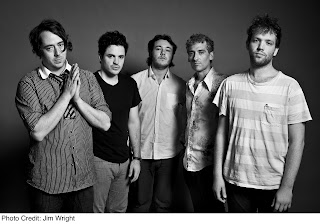 As we mentioned in our previous post that Caveman were one of our "15 Artists to Watch in 2012," this Brooklyn band has made a name for themselves at American showcase festivals like SXSW and CMJ. After gaining rave reviews of their self-released debut, CoCo Beware which was released last fall, Caveman are ready to emerge from Brooklyn and trek across the music world. Blending psychedelic rock and pop combined with swelling guitars and drums, Caveman provide a sound to admire. As they are currently on their first headlining tour, which see's the band make a stop at New York's legendary Bowery Ballroom on January 20, I had a chance to speak with singer, Matt Iwanunusa about the band's beginnings, praise, Brooklyn and what happens next.
After forming in 2010, you gained so much attention in 2011. What was it like to be around for only a year and have all this buzz?

Matthew: It's exciting! People have really responded nicely to what we are doing and it's been really inspiring. A perfect way to spend the last few months before the apocalypse.

You started the band older than most bands that start young; do you feel you had to prove yourself more to live out your music dreams?

M: It takes time to find the right fit with things. I don't think it's about when you get into the scene, it's about making something you're proud of. That's the dream my friend. People respond to that.

What made you start the band?

M: I don't know how to do anything else.

Your sound is very unique; how would you explain it to someone who has never heard of you before?

M: Tunes you can vibe out to... sending out the pos vibe.

Who were some of your influences when starting the band?

M: Well during recording I was really obsessing over Brian Eno, Fleetwood Mac.

M: The same way you break the mold of being just another band... I love NY, I love the scene. Lots of talented people reping!

CMJ 2011 was a big success for you, is it something you would return to and build off of now that you were one of the break-outs from it?

M: CMJ and all the other people who put us on their shows really made it a special time for us this year! Of course I would play it again, we had fun.

What has this experience been like for you this far?

M: Its been really great. Having people appreciate something my group of friends and I created is one of the best feelings ever, but we're staying focused to hopefully keep the good times comin!

The title of your debut is “Coco Beware,” what does the title signify? Is there a Coco?

M: Put the lime in the coco my dude.

M: We had one of the best men alive, Nick Stumpf, Producing it. It was a time in my life and everyone involved I think. 6 men just focused on an idea that we really cared about. I learned a lot about myself and made something we're all proud of!

Where does Caveman go from here?

What has been the best thing about being in Caveman thus far?

M: Spending time with everyone involved, meeting people in different towns, having people enjoy our music... the list goes on.

Posted by Salvatore Bono at 8:15 AM