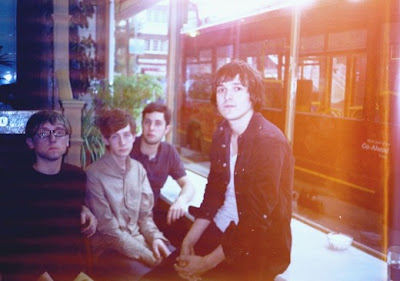 Every new year brings an influx of new bands and sounds to check out. As we posted our "15 Artists to Watch" in 2012 list last week, if we had to pick a 16th band, it would be Towns. The UK band has been building a buzz in their native land thanks to a big push from NME. Yet, Towns are just enjoying the spotlight that is being shed on them. A band with a strong 90's Britpop sound, it is no wonder they are building a strong fanbase on a popular sound. I had the chance to speak with Towns front man, James Maclucas. Take a look.
You are still a new band and building a buzz, how difficult is it to be a young band in the era that there seems to be a new one pop up every week?
The fact that there are people taking such a keen interest in new music can only help young bands. The internet has certainly made things more accessible, but it's still important to be good live. None of that social media stuff counts for anything if the tunes don't hold their own.

Being a young band and having to self finance everything, do you feel that this is an investment well worth it?

It's definitely a worth while investment otherwise our money would be wasted on a average night out. We save up our cash together because we love what we do and we're really having fun with it. I think its the wrong industry to get into if you just want to make money, you've got to have the passion and love it. We'd feel really lucky if anything does happen for us.

As teenagers the first band we shared a love for was The Cooper Temple Clause. Even before we started making music we would always go to gigs and listen to music together. We've been lucky in that respect, growing up together we have shared all the same experiences. The first gig that we all went to was The Vines, it was a pretty mental first gig to experience. I can also remember the look on each of our faces the first time we saw Forward Russia, they blew us away. Its a shame they couldn't capture their live sound on the record.

For great songwriting though you don't need to look any further than Jesus and Marychain, when you take away the noise all the songs can be sung on acoustic guitar... fucked up pop songs, that's what we would like to achieve.

How would you describe your band to someone who has never heard of you?

We're four lads who have grown up together listening to music and going to gigs. Now we're making music together, we can't think of anything better to do. Hopefully we can continue this and delay the onset of real life responsibility.

Brit-pop is indeed a major sound shaping the band, were you influenced by the 90’s Britpop era? Who were some of your favorites?

I think it's only natural that we are shaped by the 90's as that's the era we grew up in. But we do hate the word Brit-pop as it sounds tacky, and reminds us of a time when Tony Blair used music to gain popularity. I think in music you have to be true to yourself, it'd be fake of us to be heavily influenced by another era. I love Pulp and Oasis and its through those 90's records that you discover bands like, Velvet Underground, Smiths, Stone Roses, Sonic Youth and The Jesus and Marychain.

The name of the band, Towns, is it reflective of where you come from?

Most certainly yes. We wanted quite a non fussy name that is true to us and where we're from. I like band names such as Pavement or Ride that are just everyday words.

Does your town have a great influence on the band?

It's where we grew up so naturally our experiences seep into the music. We grew up in a seaside town called Weston-Super-Mare. It's a place full of hen parties and stag dos, where Bon Jovi supplies the soundtrack. I think we consciously fought against that and tried to escape it through our music. A lot of the themes we write about come from the monotony of everyday experiences of living in a small town.

Your live shows have been gaining you much attention with you crawling on floors and singing as one example. How much fun do you have each night you go on stage?

We wouldn't be doing it if we didn't have fun. We love watching bands who are exciting live, maybe even a bit ramshackle, bands like The Vines, Cribs, The Libertines all did live shows the right way. I hate watching bands who just stand there and are to afraid to look passionate.

You have been releasing singles like “Fields” one by one; will we be getting an EP or possible album soon?

At the moment we're just taking each step as it comes. We don't want to rush anything. But since our first London show we've had a few people interested in the band, so maybe in the near future we'll be asked to record some new tracks, but at the moment we have no backing or management, we're just four lads having a good time, making the most of opportunities we get to make music and play shows.

Music journalists back in the UK keep comparing you to Yuck, does the references and comparisons get old after a while?

We love Yuck but they weren't on our horizon when we started making our tunes, most of our songs were written before we'd heard of them. I like that band though and I can see the similarities, kinda fuzzy pop songs, but I dare say it is a slightly lazy comparison. But it doesn't bother us at all.

What is the best thing about Towns right now?

The fact that we're sharing these exciting times with close friends. Really can't explain how buzzing we all are at the moment.

What are your biggest goals for Towns?

I want to play shows all across the world, even if they're in really small clubs and we have to travel in a tiny van, I wouldn't care. We recently put on our own night in Bristol called Feed Me With Your Hiss. We set up our own P/A and there was about 50 people crammed into this really tiny pub. There was a really exciting atmosphere and everyone was buzzing. I wanna keep doing things like that. You get to meet people who are really into it and care about music, that to me is what it is all about.

Glastonbury festival is 20 miles down the road from our town, to play that would be a pipe dream come true. We just want to have a platform to put out the records and play shows.

Given the landscape these days with the internet and finding new bands all the time and giving reactions, do comments on sites, blogs and feedback about Towns ever make you want to alter things?

We take on advice from people we know. But comments on the internet aren't going change what we do. It is annoying when people compare us to Oasis, don't get me wrong Definitely Maybe is one of my favourite albums but I wouldn't say we sound anything like them.

Where would you like to see Towns in a year’s time?

It's hard to tell the future but in a year's time we'd love to be playing more shows. We really want to tour everywhere, work hard and really learn our craft. If we keep writing and doing shows who knows where we can get, but hopefully we'll be doing this for many years to come.