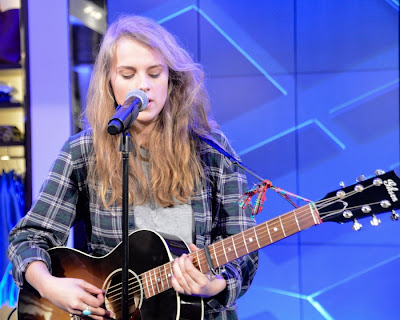 It used to be that only record stores would do in-store events with rising musicians to promote their new material, while these events still happen, just not as frequent, artists on the rise are finding other outlets in the quagmire of media to promote themselves. Iconic fashion label, Burberry has released this and they have become an outlet for rising British bands to get recognized. Artists like The Heartbreaks, One Night Only, Life in Film, Ramona and many others have all made some of their first marks with Burberry. Surprising that a fashion label as world renowned as Burberry is willing to take a chance on unknowns is not only remarkable but also simply brilliant, especially in an age when most record labels will not take a chance on some of these artists. Burberry takes the artists and cuts a video for their “Burberry Acoustic” website and places the artists in various ad campaigns then has them play around the world at store and product launches, a clever way to market and show off new lines and talent. In some instances, the artists even model for the clothing company.

For Burberry’s latest launch of a new eyewear line, in four cities around the world – New York, Paris, Sydney and Milan, the company held parties at their flagship stores to show off their new collection and artists. For the New York party at their SoHo store, Burberry welcomed Marika Hackman for her maiden New York performance and invited tastemakers from fashion, music, journalism and media into one room to launch Hackman’s career and their new sunglasses.

I had the opportunity to speak to a slightly nervous Hackman in her first U.S. interview, right before she took the stage on Thursday night. Five months ago, Hackman was debating what she was doing with her life, while some of her friends were at university or working, she was strumming her guitar and playing odd gigs here-and-there in England, then Burberry called. “It was surreal, a whirlwind. The last five months I was doing nothing,” she said of her discovery. So how did Burberry discover this unknown from a small English town, "I first came across Marika’s music when Cara Delevingne, who is currently in our ad campaign, showed me her video. She has an incredible voice and a wholly unique sound – she really symbolises modern British music in a very personal, effortless way,” Burberry Chief Creative Officer, Christopher Bailey, said on how Hackman entered his world. Hackman said, “I am proud to be repping the iconic British brand. I am blown away that I was chosen and proud and privileged to be here.” Hackman, who is a natural beauty, could be a model herself, though she said she was “Lazy with fashion.” While she is a friend of Cara Delevingne, who was on hand Thursday to support her friend’s performance, Hackman said, “It is great that Burberry are supporting up and coming musicians.” Hackman’s sound is for fans of Bon Iver, Joni Mitchell and Nico, “The first song I taught myself was Nico’s ‘These Days,’ ” she said.

After our interview it was time for Hackman to take the stage. Armed with just a microphone and her acoustic guitar, here was her first show at the Big Apple. In a short but sweet set she showed New York what she was made of. In an interesting and untraditional setting such as a major fashion labels store, Hackman had to really try her hardest to get the crowds attention, but after all was said and done, those that had their eyes on her, could not take them away. After her 20-minute performance, Hackman was embraced by the audience that was right in front of her, she has now entered the New York music world and what a way to do it.

Posted by Salvatore Bono at 9:29 AM