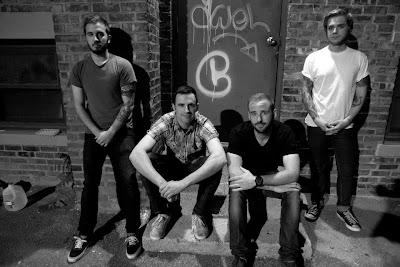 After the breakup of Boston post-hardcore outfit, Therefore I Am, the dust settled on the band members and out of the ashes came Ghost Thrower. Ghost Thrower are a band featuring former Therefore I Am guitarist Travis Alexander and drummer Chris Fernandes. Alexander, who now takes center stage in the new band, released their debut album, 10 Songs in 2011 and a handful of EPs. While the band are currently demoing new material, we had the opportunity to speak with Alexander about restarting, his influences and his other work as one of the founders and creators of Venture Guitars, a company that has made custom made guitars for various faces within the punk and hardcore community. Take a look at our interview with Alexander below:


To go from Therefore I Am to Ghost Thrower, how different was the transition?

Where did the name Ghost Thrower derive from?

I have a million different ties to the name at this point but ultimately, it means nothing. I threw a piece of cellophane out of a car window once and someone in the car called me Ghost Thrower. Or someone else threw it out and I called them Ghost Thrower? Either way, the name stuck with me and weaved its way in and out of our lyrics. ("You threw me out like a white lighter", "need to put you behind my mind in a place where I only go to find the ghost you threw away", "Go Slower") I've always been into scary movies, ghosts and ghouls. I really just liked the vibe of the 2 words together. But again, ultimate, it means nothing.

How did you end up linking up with the gentleman playing in the band now?

Chris played in Therefore I Am, Nick and I met through a girl I used to date and Ben was from a town near me in Maine. I basically showed them the songs and everyone really responded positively so we put it together. Initially, our friends Robbie and Alex played Drums and Guitar (respectively). Robbie is training in the military and has a wife and kid, Alex has a band called "The Tower and the Fool". Both of their lives seem to be kicking ass without Ghost Thrower so power to them and no hard feelings!

There are tons of various elements from punk to hardcore to rock in Ghost Thrower, who influenced your music?

Both EP's from 10 songs were written solely by me when I was super bummed out on life. At the time, I was listening to a lot of Jawbreaker, Hole, Murder City Devils, Fugazi, Crime in Stereo. I think my biggest writing influences would be Jawbreaker and Saves the Day. I love dark sarcastic smart punk rock and I think we're doing a good job of carrying the torch for our predecessors.

What was it like making music on your own for the first time?

Relieving and fun! Its nice to have a lot of input on music but ultimately, music is art and with art, you can't always have too many cooks in the kitchen. I also believe that a piece of art shouldn't be criticized until its finished. How can many people collaborate without criticizing before hearing the finished product?

The band stemmed from a series of demo’s you did in an attic, did you find inspiration in this location?

Haha perhaps in a way, but ultimately I was only up there because I had never really sang or yelled before and I didn't want the friend I was staying with to hear it. I was embarrassed. But I did end up spending a lot of time up there over the course of last fall.

For fans of Therefore I Am, how different is Ghost Thrower?

Musically, we're also really dumbed down. Again, 5 heads vs. 1. I wasn't thinking for more than just myself when I wrote these songs.

Do you still keep in touch with the guys from Therefore I Am?

Absolutely! They're 4 of my best friends and our memories will last forever. We were only in a rough spot immediately following our break up. Chris plays in Ghost Thrower, I see Alex twice a week, I love seeing Jim when he's not busy and I text dirty things to Brian on a regular basis.

How excited and / or nervous are you about this project?

I am extremely excited about this! We have our next album written and I'm stoked to let the world hear it. With prior bands, I used to think "If you don't like it, its just not your thing. No big deal!" but I can honestly say Ghost Thrower is my favorite band ever. If it wasn't, I wouldn't play in it.

What has been the best thing about Ghost Thrower thus far?

The no pressure aspect of playing music. We can play in Ghost Thrower and still have lives outside of music. With Therefore I Am, my life WAS Therefore I Am.

You also started Venture Guitars and making your own custom guitars, what is your process on this?

We buy wood and shape it into whatever the customer's heart desires! Nothing is outsourced besides pick ups and hardware. Lenny is our master builder, the entire shop fits into his mom's two car garage, yet some how, things are turning out splendidly!

What do you like better, playing the instrument or crafting it?

Playing of course! Without the instrument, there would be nothing to craft/maintain.

Posted by Salvatore Bono at 9:01 AM