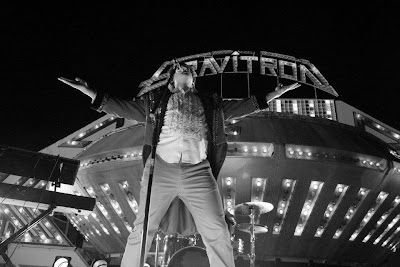 Allow us to introduce you to one of the best new voices in the New York City folk scene - Jon Sandler. Sandler who fuses folk and pop together makes him someone that fans of both Ryan Adams or Elton John would admire. While playing the same scene that Bob Dylan got recognized in, Sandler has also found a base within some of the new cafes, clubs and venues in New York City that has helped his fanbase grow as it should. On June 12, he will release Late Night Champ, and two days prior he will be at the fantastic City Winery celebrating the albums release. While Sandler makes a name for himself, we had the opportunity to speak with him and help get his name out there a bit more. As our pick for May's "Rising Artist," Sandler and I discussed what inspires him, what made him become a songwriter and how New York has had a direct effect on it all. Take a look at our interview with Sandler below:

How did the recording of your new record going?

The recording process has gone amazingly, we were fortunate enough to work at the best studios with the best people in the industry. Things have gone really smoothly since the vibe around this new album
has been so positive and exciting. The mixing process has been taking a little longer than expected but as a wise man once said: all good things are worth waiting for!

Is it exciting to finally have everything in the studio and seeing things come to life?

It is extremely exciting to see my songs come to life!  My band is unbelievable and has been a huge part in helping me bring the songs to life even better than I imagined. Our piano player and producer of the album Dominic Fallacaro has sprinkled a lot of his brilliance on the album and we are all very proud of it.

Being a singer-songwriter from New York, how do you stick out in the mold of so many young men and women doing the same thing?

I just try to write as honestly as I can and hope that the music is exciting and refreshing to people.  My band has a very unique, hard to classify sound and we are constantly trying to be creative and genuine
and can only hope that we are noticed amongst the masses. I believe if your intentions are good, people will respond.

I have been saying indie pop fusion - you'll have to eventually tell me when you think!

I am inspired by bands and songwriters who write honest and beautiful songs, but are also charismatic and know how to put on a good show.  I love Elton John, The Talking Heads, Queen, Annie Lennox, Ben Folds, Phish.  So, pretty eclectic.

You have been playing since you 9-years-old, as a young child did you know you wanted to be a musician the rest of your life?

When I started writing songs, it was something I did without thinking, like breathing. I knew I would always write songs, because I couldn't not, but I didn't decide I wanted to perform and write songs for a living until I started to perform for large crowds at the end of High School. I knew at that point that it is why I am here.

Given the ever changing musical landscape, what is it like to be a rising musician in this day and age trying to make it?

Today's music landscape has made pursuing music extremely difficult but also in some ways easier.  You can do everything yourself and reach millions of fans yourself, but the backhand of it is that
EVERYONE is doing it themselves. It is a total hustle and can be a lot of pressure but there is nothing else I'd rather be doing.  For me, the rewards outweigh the hardships.

You video for “Nowhere Bound” see’s you wandering around New York City and parts of the world. Do you find yourself getting lost in the city for inspiration?

The city totally inspires me but after living here for 7 years I don't really get lost anymore.  I love that website video because I do feel like I am all over the place, sometimes even, "nowhere bound."

Does the city inspire your work?

Absolutely, NYC has got to be the inspiration capital of the world. There is contrast, extremes, rich and poor, big and small, beauty and abrasive all in one place. What more could I ask for?!

Your backing band is The Fancy Band, how did you hook-up with them? How long have you been working with them?

My band is made up of the best musicians in the world: Dominic Fallacaro, Sam Merrick and Chris Kelly.  Long story short, I have been playing with Sam (the drummer) since college where we were in a band called Luke Warm.  Dominic (piano) and I actually went to high school together but didn't start playing music together till only 2 years ago, and I found Chris (bass) on Craigslist also about 2 years ago. It didn't take long for us all to realize that this band felt very special.

What is your biggest hope as a musician?

My biggest hope is that my songwriting can give people comfort and pleasure and be used for good. If I can help someone articulate a feeling or get through a hard time or help someone feel related or part of something bigger than themselves, I will be happy.

Posted by Salvatore Bono at 4:16 PM