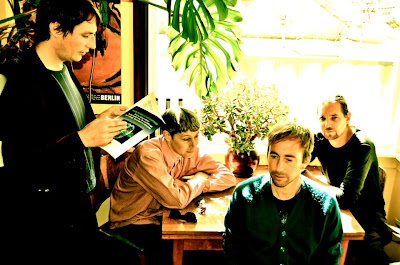 New Zealand is slowing finding itself on the indie musical map. With bands like The Naked and Famous, Ladyhawke, The Ruby Suns and more. One of their latest exports, at least to the U.S., is shoegaze-pop band, The Golden Awesome. This quartet first gained attention at the 2011 CMJ Music Marathon and with the release of their debut album, Autumn, The Golden Awesome are gaining attention all around the globe. We spoke with bassist Matt Steindl about the band's roots, culture and sound. Take a look at our interview with Steindl below:

First off, who came up with the awesome name – “The Golden Awesome?”

Our name just came out of somewhere. We wanted to have a name that also doubled as advertising; to give people who haven't heard us some idea of what kind of music we are trying to make.

Your music is very unique and different, who has had a big influence on your sound?

The biggest influences on our music have been all of the fantastic bands we have played with and that our friends are in. Groups like The Orchestra of Spheres, Beastwars, Detrytus, Grass Widow, Coasting, T54, Terror of the Deep, Heka, Autumn Splendor. It is a long long list. Also the great local bands we would go and see when we were youngsters.

You were gigging around New Zealand for a while and then notice started to happen, how supportive is the music community in your home country to new bands?

The NZ music community that we are involved with in NZ/USA is real good. We wouldn't exist without the support of our friends. And especially the support of those people who really know how to get things done, like Brett & Fiona at M'Lady's Records, Blink and Matt Scobie

Does New Zealand have any type of influence on your work?

As New Zealanders it would be impossible for it not to.

CMJ was a big event for you last fall, what was that experience like?

CMJ was a great opportunity for us. The NZ music showcase organised by Gary Fortune and the New Zealand Music Commission was a really well organised and promoted event. Many thanks to them for putting that on. It was also a good opportunity for us to meet some of the other cool NZ bands playing at the moment, like Princess Chelsea, Popstrangers and Street Chant.

One of the showcases that you played was with a group of New Zealand artists; do you look at that as country camaraderie or competition?

If it was a competition there would have been prizes.

You just released your debut album, what was that experience like making that?

Really good. Our guitarist Jo Contag did all of the recording and mixing, so he may have a different answer...The album was then mastered by Warn Defever at UFO and pressed by M'Lady's Records.

Was making your debut harder than you thought?

We have all played (and play) in other bands who have recorded before, so the actual process of recording was something we were all very familiar with. If anything it was probably easier that we thought as it was all done 'in house.'

Posted by Salvatore Bono at 7:55 AM