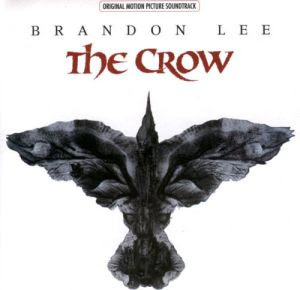 A soundtrack at the #1 spot on the Billboard 200 charts? It happened! In 1994, right when the cult classic, The Crow was released to theaters at the end of March, its brilliant soundtrack took everyone in the music world but surprise, not just on how great it is, but by how many units it sold and where it landed on the charts that year.

The soundtrack, which features popular and rising alternative bands of the late 80's and early 90's, helped convey the films iconic dark and gothic image and gave it a beat. With contributions from The Cure, Stone Temple Pilots, Helmet, The Jesus and Mary Chain, Violent Femmes, Rage Against the Machine and covers from Nine Inch Nails doing Joy Division's "Dead Souls," Rollins Band doing Suicide's "Ghost Rider" and Pantera doing Poison Idea's "The Badge." The music conveyed the mood, not just of the characters in the film, but of the misfit and outcasted 90's youth and brought it to the pop culture forefront.  Still after all these years, The Crow soundtrack is one of the defining moments of the 90's and one of the greatest soundtracks and compilations ever assembled.
Posted by Salvatore Bono at 5:07 PM