EXCLUSIVE! This Many Boyfriends INTV! 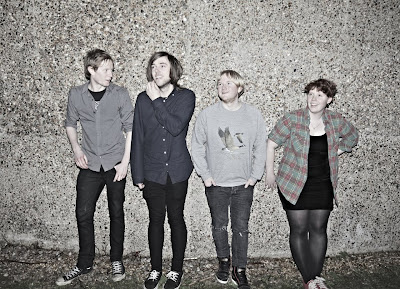 Many indie bands have their first big year, for England's This Many Boyfriends, 2011 was their first taste of success and buzz. The band from the North took their garage rock sound all around the U.K and Europe and eventually landed them onto the iPods of critics and fans in the U.S. This Many Boyfriends take catchy hooks and raw energy and super charge them the best way they can. While last year may have been their first big year, in terms of buzz and success, this year see's the band sustaining the buzz and as they work on their next step we had a chance to speak to singer Richard Boyfriend (Yes, like the Ramones, they have all adopted part of the band's name as their last name). Richard and I spoke about the band's acclaim, music and how many boyfriends is too many boyfriends. Take a look!


2011 was an interesting year for you with the amount of praise and buzz you have been receiving. How do you respond to the high praise?

There seems to be something new and exciting happening every day! As far as high praise goes we try to take it all in context and not let it go to our heads. We're still just a little indiepop band after all!

Hailing from Leeds, so many bands have come from that city and made a mark and name for themselves. Do you feel that you have to live up to the legacy of bands that made their mark there?

Not really. We're more excited about the bands that are around us in Leeds right now, like Just Handshakes (We're British), The Birthday Kiss and The Seven Inches. I just guess historically there just isn't that much of a legacy of Leeds bands to us, not as much as there is in, say, Manchester.

There have been many comparisons to you and The Cribs, after a while does it get annoying or are you flattered to be compared to the Jarman clan?

The Cribs are an excellent, ground breaking Northern pop group so we don't mind the comparison at all! It's flattering to be compared to someone so good and that we really love and admire.

You wear your influences on your sleeve. With you writing a song about Paul Simon, taking your name from a Beat Happening tune, discussing The Pastels in a song, do you feel this is a way to pay tribute to those that have shaped you?

Definitely. It's just a big part of my life, it has always seemed natural to write about my favourite bands because that is my life experience. I'd love to be as wonderfully experienced as a writer like Bruce Springsteen and write songs about working until my fingers bled and life on great American highways but my life is pop records and working putting files in cabinets!

Who else has been a big influence?

How exciting right now is it to be in a band coming from UK with the current boom of artists coming from your country?

It's pretty exciting, no more than normal. I think the UK has always had an amazing live scene because each town has a dedicated core of people putting on DIY nights so they can hear the music they want to in their small town. And its pretty easy and quick to get anywhere in the UK, especially the north where most of the big cities are only an hour or two away from each other. So its exciting that we get the opportunity to play to new people quite a lot.

Is it a big deal to still try and make it in the US?

I think so. Its still seen as the next step for UK bands to try and make it in America and always will be. Its one of those things where you prove yourself as a 'real' band. And the UK is so immersed in US culture, especially music, so its natural that UK bands would aspire to go to America. America is so vast compared to where we're from that it seems like a bit of a challenge but we love a challenge!

Having fun! Gigs are basically a chance for us to hang out and mess around, and the fact that people like seeing us do that on stage is amazing! Anyone at all taking an interest in the music we make outside of our family and friends is just ridiculous and so flattering. I think that is the best thing.

Posted by Salvatore Bono at 6:39 AM