In Conversation With Morning Parade 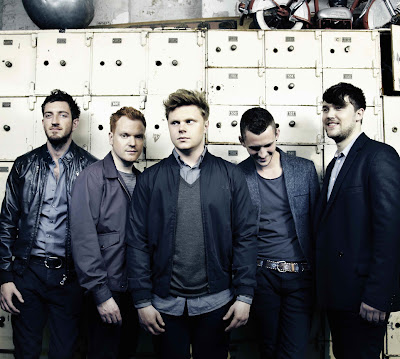 Weather-wise New York City has been looking like its much wiser, older brother – London, the last few weeks. On one of the rarely occasional perfect spring days, English band Morning Parade performed on the rooftop of EMI. The Essex band, who released their self-titled debut album earlier this year via EMI, have been enjoying much buzz since their arrival to the U.S. in March with fellow Englishmen, The Kooks, and a blitzkrieg six performances at SXSW. The band was back to promote a forthcoming U.S. tour and the U.S. release of their album.

Just after they played high above 5th Avenue, singer Steven Sparrow, bassist Phil Titus and keyboardist Ben Giddings and I sat down to discuss their career and the whirlwind trip this all has been for them. Normally a five-piece, but these three lads came over to make a name for the guys back home and the hard work everyone in Morning Parade have been doing. Hard work is just what got Morning Parade to where they are and where they want to be. “I was working in a warehouse with Phil and then we got the call and two months later we were in Damon Albarn’s studio recording,” said Sparrow. That call was from their major label saying they wanted to sign them. The band, whose songs are very heartfelt and deep have grasped the attention of European audiences for a few years and now across the pond, people are starting to pay attention. For their debut, Morning Parade recorded in Blur / Gorillaz front man Damon Albarn’s 13 Studios in London, “It has a weird vibe, but its pretty special,” Titus said of the studio. Sparrow said, “I had Blur’s ‘Parklife’ record as a kid and it was weird to be in there with him [Albarn] there. But it was also very good.”

If anyone told the guys in Morning Parade that they would one-day record in Albarn’s studio, they may have laughed, it is an unusual modest sense that keeps the band grounded. “We don’t read what is written about us,” Giddings said, “We have to focus. Good press or bad press is one person’s opinion and we avoid the buzz band thing.” Titus concurred, “We are like a horse with blinders on, just focus on what is ahead.”

They each come from blue-collar backgrounds and have done everything from work in factories, warehouses and day laborers to fund their dream. Their dream is imprinted in the music they make and the skin on their bodies; each member has a tattoo of the band’s logo. “The have been the best years of my life. I feel like a child, to be able to do the one thing I have always wanted,” said Sparrow. The band, who have been together for four years used to get together after work and jam in a nearby studio for £40, once they got tighter as a group, they got serious with their craft.

While Morning Parade produce great radio-friendly rock and pop, the band take inspiration from everyone ranging from Radiohead, Muse, and Queens of the Stone Age. “My parents were into pop, it’s always in the back of my mind. Then, when I grew-up, it was all the Britpop and indie,” Sparrow said, “You cannot deny who you are, I am not afraid of a melody.” While pop maybe a dirty word for journalists this side of the Atlantic, Giddings said, “You have to go back and listen to ‘The Bends’ by Radiohead, it is a pop record. Radiohead have an element of pop to them.” “We like a big sound, a big massive sound,” said Titus, because of that sound; the band was able to make quick fans on their maiden voyage to the States earlier this year. When they made their first U.S. appearance, it was when they opened for The Kooks in front of a sold-out New York crowd at Terminal 5, hardly anyone in the room knew who the band was, after their performance, everyone in the room was asking who they were. Sparrow admitted, “The day before [the show] our album had come out in the U.K. and played to thousands of people in London. We got drunk, got three hours of sleep, got to the airport and by the time we got in, we had to soundcheck then go on stage. We felt like zombies, we were worried.” Titus said, “We were walking out and going ‘Fucking hell! How are we going to do this?’” They managed to pull it off without anyone realizing the cyclone-like schedule they just endured.

For Morning Parade the dream they always wanted is only in it’s infant stages, “I get to play live and tour with my best friends,” said Sparrow, a testament to what is important for this band – not the money, not the fame
Posted by Salvatore Bono at 3:45 PM