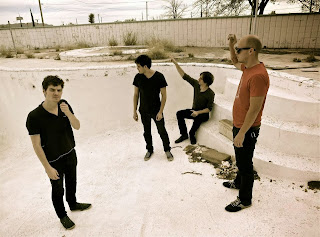 After releasing two fantastic albums and touring with the likes of Portugal. The Man, The Walkmen, Beady Eye, Glasvegas, Editors, and The Antlers, New York City sci-fi rockers The Dig are set to hit the road this fall with Leagues in support of their latest EP. The Dig have been making a name for themselves in NYC and beyond. They still remain one of our favorite bands to follow and one of out favorite bands to watch and if they hit your town, it is imperative you check them out. Before they hit the road, we spoke with bassist and singer Emile Mossari about their latest EP, touring, and their signature sound.

Your last record, the beautiful, Midnight Flowers, was much more mellow than your debut. Did that record signify a new shift is style and sound or just an experiment?

Thanks! So glad you like it! I think that just happened naturally.  A lot of the songs we were writing at the time that we were the most psyched about happened to be on the mellow side.

Your new EP, Tired Hearts is a collection of five songs, what made you want to release a special EP and not finish out an album?

We wanted to put something out this year and we thought that these 5 tunes fit together in a cool way so we figured we'd put out an EP.

Will these songs signify what fans can expect on the third record and is that in the works?

Not sure exactly when we will make our third full length and its hard to say what its going to sound like at this point. We hope that the music will continue to evolve and change but still sound like us somehow.

For Tired Hearts you worked with Pavement producer, Bryce Goggin, how was that experience?

It was great.  It's nice to have a 5th set of ears so we're not left to our own devices and biting each others heads off.  We have worked with Bryce on our first two records so its always great to hang and collaborate with him.  He's a great dude and has an amazing ear for making records.

What did Bryce teach you that you did not know before?

A lot of things, We've worked with Bryce bunch and over the years so we've developed a rapport with him.  He's a bit of an oddball like us which is nice. He's made so many great records so we all trust his opinion and sensibility. I'd say one thing in particular we've learned from him is how to flip a song inside out and take a completely different approach.  Basically not to get too attached to the initial arrangement of a tune and be able to step back a bit and mess with it.

After being on the road for most of your lives, playing your music, what is the best thing about touring and what is the worst?

Good question.  Best thing I'd say is probably staying connected to people that you normally might not have the means or reason to fly out and visit.  Whether that be fans we've made or friends and family we have all over the country.  Touring keeps you plugged in to that which is great.  Worst thing is probably eating shitty food and sleeping in van,  driving all night between gigs etc.

When hitting the road, what is the one thing you cannot live without and always have to have?

Car games are an essential tool.  Extremely serious and competitive games we play on 12 hour drives that swallow up a lot of hours. I don't think we could live without those.

You have opened for Portugal. The Man, Beady Eye, Glasvegas, The Walkmen, The Antlers, playing with these bands, what is it like? Do you ever take any of their tricks and apply them to your set?

Definitely.  Those are all amazing bands that we we're lucky enough to play with. You learn a lot about how to interact with the crowds and lift a room.  How to connect with an audience. More than anything its inspiring just watch a great band play every night.  Especially a band like the Walkmen. They're a legendary band among bands so watching them perform is both educational and inspiring.  Ben Kweller is also an amazing performer to watch.  How at ease he is with his audience and his ability to connect with people and be so personable while he's up there.  There's a lot to be learned from that.

We have been tracking this band for a while, and your shows just keep getting better and better. What is it like being on stage and doing what you love?

Thanks!  Playing shows is the best thing in the world. Wish we could do it every night.
Posted by Salvatore Bono at 12:42 PM