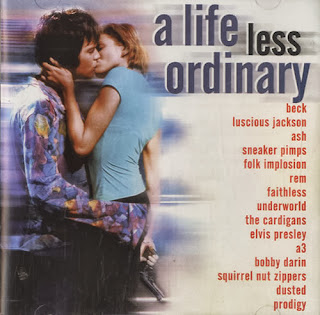 1997 was an interesting year in music, the second British invasion was happening, electronic music was creeping out of the clubs and into the mainstream, swing music was having its neo-revolution, and hip-hops costal war was making headlines more than it was making hits. No soundtrack captured the year in music better than that of Danny Boyle's A Life Less Ordinary. Boyle, who reteamed with his Transpotting star, Ewan McGregor and Hollywood "It" girl Cameron Diaz for his big budget black comedy.

While the film failed to deliver the box office numbers the studio was hoping for and failed to gain the critical reception that his previous work, Transpotting and Shallow Grave gained Boyle, A Life Less Ordinary was a film other than ordinary. It was a comedy with a divine twist, claymation, and a banging soundtrack. Featuring the music of the time from Beck, Luscious Jackson, Oasis, Ash, Sneaker Pimps, REM, Squirrel Nut Zippers, Prodigy, The Cardigans, and Underworld and classic tracks from Elvis and Bobby Darin, Boyle made the music work so well, it was it's own character, much like he had done previously in his other films. All the years later, the soundtrack to A Life Less Ordinary is not only the music of the film, the soundtrack to a year and era.
Posted by Salvatore Bono at 5:07 PM