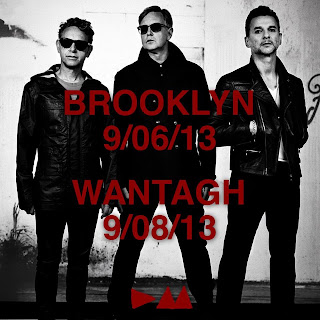 For the last 33 years, Depeche Mode have managed usher in a new era of music with their electronic, new-wave and later cold-wave / industrial sound, sustain their popularity and return to America more popular each time they tour. In the first of two New York area shows, the English electronic pioneers brought their "Delta Machine Tour" to Brooklyn for their Barclays Center debut in front of a wild and excited sold-out crowd.

As the houselights dimmed just before 9p.m. and a thumbing reverb sound echoed from the venue's flawless speakers, Depeche Mode walked out on stage as singer Dave Gahan spun around and nearly pirouetted to his mic stand. Opening with "Welcome to my World," off the band's latest fantastic record, Delta Machine, it set the dark and often times, sexual tone for what was to come from the rest of the band's performance. Backed by giant triangular screens projecting random images, words, and footage of the band on stage, it was then into "Angel," a song that made it's live debut earlier this year at Ed Sullivan Theater when the band performed on Live on Letterman. While the latest material was the reason for the band to hit the road and travel around the world, it was the classic material from Depeche Mode that got everyone in the packed house on their feet, songs like "Walking in My Shoes," "Precious," "Black Celebration," and "Policy of Truth," all came with deafening screams from the crowd, which Gahan fed off of as he transformed into a gothic Elvis and swung his hips, danced around and removed articles of clothing in such a way that the cast of Magic Mike would take notes. At 51, Gahan has survived a drug addiction that nearly killed him, two divorces, a heart attack and cancer, and yet, he proves each day that he is a survivor seems to be in the best shape of his life and appears to be the most comfortable he has ever been in his own skin and shows age is just a number. In all the years I have been seeing this band, this was certainly the most excited and most energetic I have witnessed Gahan, a true showman and phenomenal front man, at points he would even high-five his drummer Christian Eigner and would smile from ear-to-ear as he did so.

While Gahan may have been the star of the show, principle songwriter, guitarist, and keyboardist Martin Gore took center stage a few times for solo performances that would slow down the tempo of the evening, but certainly not the mood. As Gore would be backed by the bands touring keyboardist, it was a rare moment of intimacy in such a large venue as he sung "The Child Inside," and "But Not Tonight." All of this altered as Gahan, keyboardist Andy Fletcher, and Eigner returned to play Delta Machine's first single, "Heaven," "Soothe My Soul," and a fantastic live remix of "A Pain That I'm Used To." They sustained the energy with "A Question of Time," "Enjoy the Silence," and "Personal Jesus," which brought the house down and the main set to a close. As DM retreated to the wings for a brief break before arriving for their encore, it would be anyone's guess what they would play. But, to celebrate the anniversary of "Just Can't Get Enough," which was released 32 years ago this weekend, the band broke out the rarely played classic single and did it in such bombastic fashion, extending drum solos, adding more synth, and of course, Gahan's fancy footwork. For the near two hours they were on stage, the 20 songs Depeche Mode played were a musical timeline of their vast body of work.

Encore:
Home
Halo
Just Can't Get Enough
I Feel You
Never Let Me Down Again
Posted by Salvatore Bono at 9:40 AM