EXCLUSIVE! So So Glos INTV 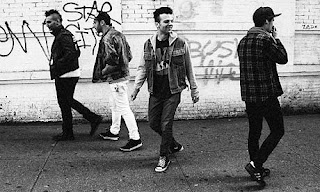 In this day and age being a "Brooklyn band" usually means you came from some other part of the U.S. or in some cases some part of the world, settled in a ungentrified neighborhood, formed a band, gained acclaim and because you were form the borough that gave us Biggie and Beasties, you were already cool. But what about the bands and artists that are actually from Brooklyn, meaning born and raised? There seems to be a less number of those emerging in the last few years than those featuring the transplants. Now, it is about time for the real Brooklynites to stand up as Bay Ridge's So So Glos take an old school punk aesthetic and give it a pop twist. We spoke to singer Alex Z Levine about being from the "it" borough, their sound, and being part of a DIY scene in a city filled with corporations. Take a look at our interview below:

While many “Brooklyn bands” are people transplanted from other cities and then move to Brooklyn and form, you are an actual Brooklyn band born and raised. When you see so many artists taking the credit of your hometown, how do you feel?

It's true that our band was born and grouped together in Bay Ridge, Brooklyn but really, that's just a spot on the map and it doesn't mean everything. A lot of media sources have overblown the idea of  "Brooklyn" and used the place as a brand to search for some form of authenticity in a sometimes corporately sponsored world. In reality, there's no great place to be from, and the fact that our band was born and raised in Brooklyn doesn't make us more " real", it just means we spread the love and party Brooklyn style.

Hailing from Bay Ridge, how did the neighborhood influence your work?

It’s a suburb within a city. We moved around many neighborhoods both in and around NYC and have always lived in more suburban type places on the fringe of the city. I guess we got the grit of the city and the angst of the suburbs.

One of the many things I love about this band is your hard work in creating all ages places for people to see bands and come together. What is it like being a venue owner these days?

We don't own Shea. Our oldest friend from Bay Ridge, Adam Reich started the spot and we've helped build the place and community along with him. There's a whole clan that runs Shea in a comune type dysfunctional family style.

With so many bands, movies & TV shows being filmed, photo shoots taking place, and gentrification of neighborhoods, not to mention a pro basketball team -- how do you feel about the Brooklyn revolution happening?

Brooklyn is a constantly changing place as it's always been throughout history. If you recently moved here, make yourself a part of the community by including yourself in your neighborhood and get to know your people on the block. Don't be a stranger and walk from your newly built condo to the train with your head held down. That's the type of behavior that breeds anger and negativity in communities.

In many ways, Shea Stadium CBGB’s of the borough, as a Brooklynite, how thrilled of are you to be one of the co-founders of such a respected and popular venue?

Shea Stadium is a great place to see a show, to let loose, to be yourself. It's a great thing and we're thrilled to be a part of it.

As a punk band, who are some of your influences?

After six years together as a band and a handful of EP’s released, you finally released your debut this year. What was that experience like?

Blowout is our second full length record. Our first record was a self titled LP that we self released in 2007. Blowout felt a lot like starting over and that was a good thing. A blowout is a party, a broken intangible record, it’s a flat tire, an explosion, a smashed ego or cellular device and a NYC haircut. It's fresh. It was refreshing to start over.

What did you learn about yourselves while making your debut?

We grew down, we looked up . During the recording process,  we had to unlearn everything we've ever  known and we did that. Then we learned everything while making the record, and then we forgot everything again. Now we know nothing about ourselves or anything else.

You are great friends with Titus Andronicus, could a possible collaborative split or single happen in the near future with both bands?

What is next for So So Glos?

We're gonna move to L.A. and start a venue called " Ebbets field". Cash in .
Posted by Salvatore Bono at 8:57 AM