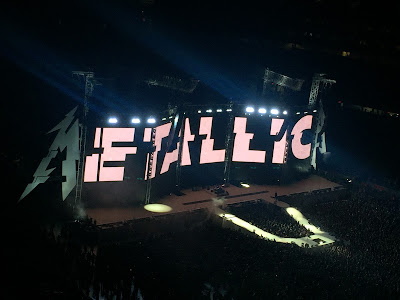 Less than a week into their massive Worldwired summer tour, Metallica hit the New York area for the first of two shows. On Sunday night, metalheads from the tri-state area spent Mother's Day at New Jersey's MetLife Stadium as the San Fransisco metal icons returned to the Medowlands for the first time in 14 years.

Listen to Our Essential Metallica Playlist on Spotify

A near sold-out stadium was packed with fans of all ages, types, and groups ready to rock as Metallica were ready to bring their new album, the fantastic, Hardwired... to Self Destruct to life.

Opening with "Hardwired," "Atlas Rise!," "For Whom the Bell Tolls," and "Fuel," what was impressive was as much as this band gets knocked for changing their sound over the years and doing things a bit more commercial, their fans still memorize and absorb every word no matter how old or new the song is. Each of the new tracks was sung back to the band with as much gusto and pride as the classics. What also was impressive was how fantastic these new songs sound in concert. Like all Metallica songs they are meant to be played live but those from Hardwired... sound better and much more furious than from some of its predecessors. 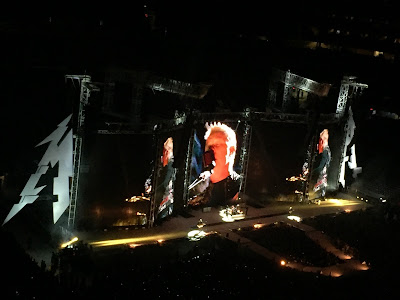 The band, who performed on a massive white stage that stretched the width of the football field, were perched in front of massive HD screens which were bookended by their glitchy "M" and "A" from their logo. As the screens broadcasted the band to the nosebleeds, as well as random visuals and film footage, no matter how tiny or massive the members of Metallica looked, it was clear they were having a blast.

Singer James Hetfield has mic stands played all around the stage so he can go and sing wherever he wants, whenever he wants. Lars Ulrich was perched on a drum kit, which unlike previous tours, does not rotate or move, so he was stationary as guitarist Kirk Hammet and bassist Rob Trujilo would strut their stuff across the stage and move around to fans who were in the pit.

"After 36 years, thank you for still supporting us," Hetfield told the crowd as he also explained that the band look at their fans as family. "We don't care what is the color of your skin, who you voted for, what your religious beliefs are... you are all Metallica family," he added.

The band played a perfect blend of old and new tunes like "The Unforgiven," "Moth Into Flame," "Wherever I May Roam," "Halo on Fire," "Whiplash," and "Master of Puppets." They pleased everyone they could and played to everyone that paid the price of admission and didn't cater to a setlist that could have just been just hits and new songs. 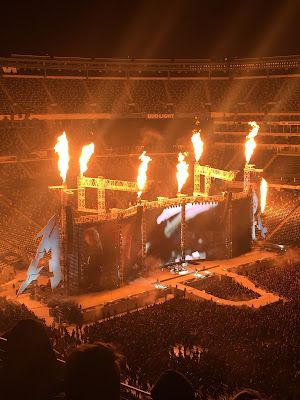 Metallica pulled out all the stops with group drum solos, drum kits rising from the stage, instrumental solos, pyrotechnics, balloons, and fireworks that could rival those put on during 4th of July shows in Manhattan each summer. It was a much of a spectacle as it was a rock concert, which clearly how they intend to do things from now on. 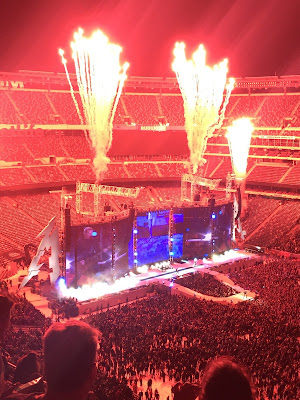 Hardwired
Atlas, Rise!
For Whom the Bell Tolls
Fuel
The Unforgiven
Now That We’re Dead
Moth Into Flame
Wherever I May Roam
Halo on Fire
Whiplash
Sad but True
One
Master of Puppets
Fade to Black
Seek & Destroy

Encore:
Fight Fire With Fire
Nothing Else Matters
Enter Sandman
Posted by Salvatore Bono at 6:56 PM