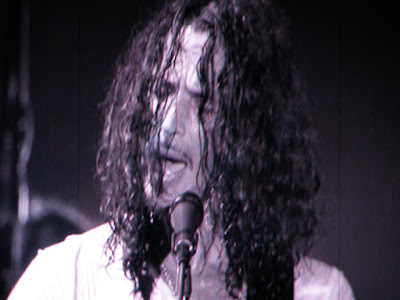 The news of Chris Cornell's sudden passing Thursday morning sent shockwaves through the music world. The Soundgarden frontman passed away at 52. A Detroit medical examiner ruled his death a suicide.

Cornell, who was in Detroit playing a show with Soundgarden Wednesday night, was found in his hotel room with a band around his neck, according to reports.

The singer, who seemed to have everything together -- successful career, loving wife, three kids, left the Earth in unexpected fashion.

According to reports, one of the final songs Soundgarden performed Wednesday night at the Fox Theater was a cover of Led Zeppelin's "In My Time of Dying," which features the lyrics: "In my time of dying, I want nobody to mourn / All I want for you to do is take my body home."

Cornell was active on social media hours before his passing, posting lyrics to the Soundgarden song, "By Crooked Steps:" “I'm the shape of the hole Inside your heart,” on Instagram.

Cornell, who formed Soundgarden in the 1980s, became a pioneer in the grunge movement along with his colleagues Alice in Chains, Pearl Jam, and Nirvana. They would all go on to rule the charts for the better part of the 1990s.

After Soundgarden split in 1997, Cornell went solo and enjoyed a successful career before linking up with former Rage Against the Machine members Tom Morello, Brad Wilk and Tim Commerford to form Audioslave.

In 2010, Soundgarden reunited and two years later, released the acclaimed, King Animal, album. They were supposed to put out a new album this year, no word on what is happening.

Soundgarden was slated to perform at the Rock on the Range festival in Columbus, Ohio, Friday.

His passing has stirred emotions for all of us at Officially A Yuppie as we flew to Chicago to see Soundgarden in 2010 and covered the band multiple times. In the fall, we caught Temple of the Dog's first New York City performance, where Cornell had Madison Square Garden at their feet. It would be the final time he would ever play the city.

I also remember seeing Audioslave at Lollapalooza 2003, long before this site was even a thought, and being blown away by their power. I still stand by that performance that if they kept on the trajectory they were going, they could have been America's first answer to Led Zeppelin.

His life may be over but his music will live forever. Our thoughts go to his family, friends and bands.
Posted by Salvatore Bono at 1:36 PM