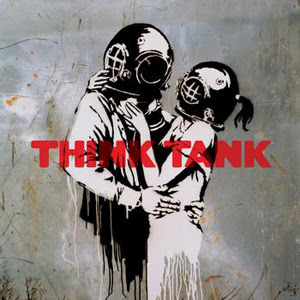 By the turn of the century, Damon Albarn was expanding his musical tastes. Maybe he always had but by the time 2001 rolled around, he wanted to experiment with everything but Britpop. In that year, he formed Gorillaz with Jamie Hewlett, and started working with the world's first animated band which was a alternative rock / rap hybrid. Little did anyone, including the creators, know how big it would become. But Blur was Albarn's first band and first love and he had some unfinished business with them. At that start of what would become their seventh album, Think Tank, guitarist Graham Coxon went into rehab for alcoholism, and Albarn and the band tweaked their sound. Instead of just guitar driven music, Think Tank features electronic sounds and songs produced by William Orbit and Fatboy Slim. It features African influence, something the leader would later explore in his solo work and with Africa Express and Rocketjuice and the Moon, it also had elements of dub and jazz -- styles Albarn would play with in The Good, The Bad, and The Queen. Basically, Think Tank was becoming his resume for a solo career and it wasn't a Blur record the way the band had put out in the past. By the time Coxon got out of rehab, the band had some internal strife and he split. It would take two years for the album to arrive and once it did it was hit with mixed reviews. The artwork was done by a rising British street artist named Banksy, maybe you have heard of him now. Everything about the album didn't feel like a Blur record even though it said it was. After the release of the album, the band toured, then split. The would reform six years later and in 2015 released the brilliant, Magic Whip. While everything about Think Tank at the time wasn't as good as it should have been, in hindsight, it was Albarn telling us where music would go as if he had some Magic 8 ball, it also showed the directions he wanted to explore.

Listen to Our Essential Blur Playlist on Spotify

Listen To Our Essential Gorillaz Playlist on Spotify
Posted by Salvatore Bono at 6:02 PM