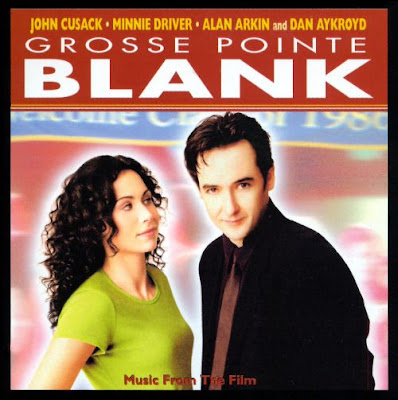 The charming action-comedy Grosse Pointe Blank became a surprise box office success story in 1997 when it arrived in theaters. The film, which stars John Cusack, Minnie Driver, Alan Arkin, and Dan Akroyd, about a hit man who attends his high school reunion is not only fresh and original but also ridiculous -- yet, it still worked.

The film, which takes place in the 90s, showcases the music of the era in which the protagonist were in high school -- the 1980s. The soundtrack captured the era perfectly with songs from David Bowie and Queen, The Specials, The Jam, The Clash, Violent Femmes,  Guns N Roses, and more. The soundtrack was such a hit with fans, it spawned a "More Music" compilation of the film which had Echo and The Bunnymen, Siouxsie and the Banshees, Pixies, Pogues, Grandmaster Flash and Melle Mel. While we live in playlist ready-era, this soundtrack not only takes you back to the late 80s but to the film's storylines as well.
Posted by Salvatore Bono at 7:20 PM