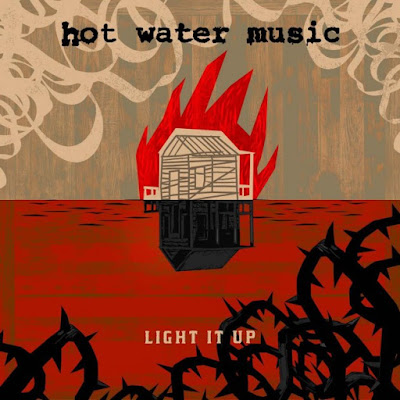 Hot Water Music will release their new album, Light It Up, in September. Take a look at the cover, above.

Noel Gallagher confirmed in a recent radio interview that his new album will be out in November.

Bono spoke to Rolling Stone about the status of the long-awaited U2 record Songs of Experience, saying: "The band will tell you not to listen to me on those kind of matters since I thought it was done last year. But I think the pause has made it better. I will give them that. But if you left it to Edge he'd still be remixing it next year. But we have these songs. The problem is we have 15 songs and to get them down to 12. We don't like long players. The actual track listing is not set yet, but we have some proper, proper fuck-off songs. "Little Things That Give You Away" is one of them." He added that Steve Lillywhite has been brought in to finish the record. "We wanted to play live to really get it to cohere. Songs of Innocence, the songs are very special, I'm very proud of the songs, but if there's one thing I would criticize it for, it's the coherence in production. A friend of mine said to me, "Songs of Innocence? It doesn't sound innocent enough. It should have been more raw." So we didn't want to go in and make that mistake again, so we went in and played the songs again. Steve is the best guy for recording us in the studio with the band playing live, so that's what happened."

CAN will release a greatest hist collection called Can: The Singles in June.

LCD Soundsystem have given an update on their new album. Main man James Murphy posted a lengthy note on Facebook saying it will arrive soon.

Posted by Salvatore Bono at 8:36 PM