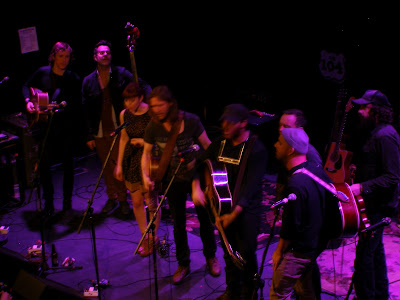 The famous phrase, "If you do what you love, you never work a day in your life," never seemed so true than when it was displayed at the 2012 Revival Tour. The Revival Tour, which began in 2008, under the idea of taking singers and songwriters, normally in punk bands and stripping them down and showing unity on an unplugged outing among friends in the field. The 2012 tour, currently on the road, features Chuck Ragan of Hot Water Music, Tommy Gabel of Against Me!, Dan Adriano of Alkaline Trio, Cory Branan and others, including special guests in each city.

It was a punk-rock ho-down in the first of two back-to-back shows in one night at Bowery Ballroom. As special guest, Dave Hause of The Loved Ones opened the night, it was immediate that this show will be an ongoing night of surprises and wonderment. As Hause was on stage, Dan Adriano would come on and sing a few tunes with him, then would Cory Branan and followed by Chuck Ragan and the rest of the people on the tour joining up for a sing-a-long of The Loved One's "Build and Burn." Hause, who is a character in his own right, showed off his passionate songs and lyrical style and would become a benchmark for the rest of the night.

After Hause was punk/country/folk singer Cory Branan. Branan, who was introduced by Hause as "The best songwriter in this room," humbly took the stage and sang his songs of love, loss and drunken nights in the middle of nowhere. Much like the set played by Hause prior, the guests of the tour would come right out and perform alongside Branan. The interesting thing about the show was that there was no time wasted on set changes, every person's instrument was right on stage and allowed for everyone to run up, grab an axe, get in front of a mic and sing-a-long.

While Branan brought a new sound to the room full of punks, it was Dan Adriano, who would change the mood and bring both comedy and drama to the stage. Adriano, known for his songwriting style of "doom and gloom," and self-loathing brought that to his acoustic set, yet, also showed how to have fun with those feelings. As fans screamed various Alkaline Trio songs to be played, he would oblige and also jump right into his own solo music. While his typical black-on-black attire was ditched for a blue skull cap and casual wear, Adriano's vocal style still sounded as on-point and meaningful as ever. Much like his show mates ahead of him, Ragan, Hause and Branan would join up and sing with Adriano. At this point, the crowd knew the deal of what to expect for the night and the joy and smiles on the paying customers faces would not drop all night.

Just as Branan played his final note, Tommy Gabel was brought to the stage. The Against Me! front man is know for playing loud, pulse pounding punk, yet he proved he could still do it unplugged. Gabel's vocals are as if a drill sergeant is shouting at you but it also has a tender Neil Young sentiment to it. Unlike his other touring mates on this year's Revival Tour, Gabel only has one solo record out, so much of his set was spent on his work with Against Me!, which of course made fans go nuts. While Gabel was off for most of his on his own, Ragan would join him and bring two very distinct voices and vocal styles of punk together.

While the amazing night of amazing musicians rolled into its final solo set, brought to us by Chuck Ragan, who is set to have a big year as his main band Hot Water Music will release their first album of new material in eight years, Ragan is a seasoned veteran of this acoustic solo shows, as he has released more solo albums than the rest of the men on the bill. His latest record, the brilliant and soulful, Covering Ground, was released last year, Ragan and his backing back (which would support the other men of the night), a fiddle player and upright bassist, Ragan plowed through songs from his solo work and Hot Water Music. His voice, which sounds like Joe Cocker smoked a pack of cigarettes, swallowed a handful of sand and washed it down with a bottle of Jack Daniels, is unique and abrasive to say the least, yet, Ragan, who is one of the best songwriters this generation has, brought passion and fire to the stage. After his set, the entire crew of Revival Tour 2012 came on stage for a mass band and jig that would bring the audience to beg for more at the end. As the house lights went up and everyone retreated out of Bowery Ballroom, the staff cleaned up, the bar restocked and the musicians took a deep breath, for an hour later they would have to do it all over again.

While each member of the tour did 25-30 minutes on their "own," the revolving door of musicians would come in and out and show the unity of this tour. It was something special to admire, while most of these appearances and duets are completely unique to just this tour and will never be repeated again, it was a beautiful thing to witness as each person on the bill would wait in the wings and watch their friends on stage. The camaraderie and brotherhood displayed by these gentlemen is unheard of these days, with bands competing for attention and bashing each other in the press, The Revival Tour showed how you could do it and get by with a little help from your friends. 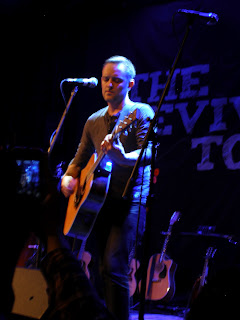 Dave Hause above / Cory Branan and Chuck Ragan below 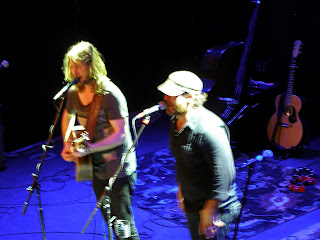 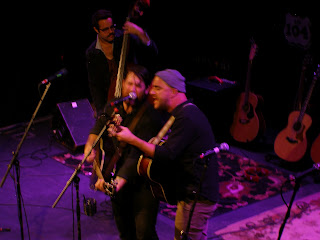 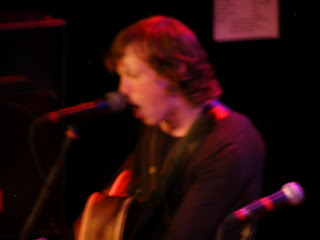 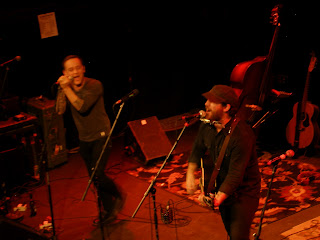 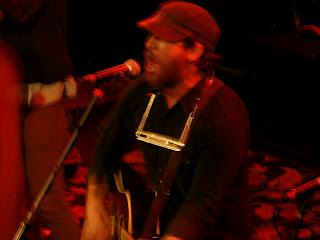 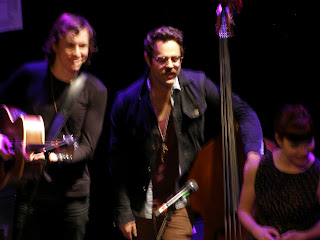 Promote Your Page Too
Posted by Salvatore Bono at 11:20 AM