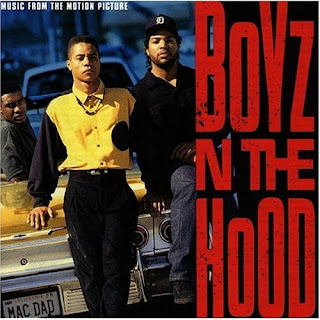 In 1991, no film shook America more than Boyz n the Hood. The film became a neo-realistic-esque look into life inside one of the country's most dangerous neighborhoods - Compton. While the film had people talking and getting a look at life inside the ghetto, the film's soundtrack fueled and furthered the testament of  what people living in that neighborhood were going through. With music from some of the biggest names in music at that time and of all time featuring one of the film's stars and former NWA member, Ice Cube, Tony! Toni! Tone!, Tevin Campbell, Kam, Too Short, 2 Live Crew, and Quincy Jones and many more. The music of Boyz n the Hood is just as explosive, violent, and truthful as the film itself, which was just a truthful display of how explosive and violent the hood was and still is.
Posted by Salvatore Bono at 7:57 PM