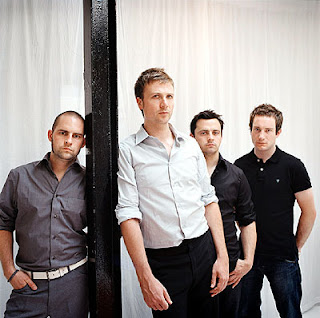 The Irish are known for their story telling like they way they are known for their whisky. So, it is no wonder a band like Bell X1 uphold the legacy of Irish storytelling in their music. Singer / songwriter and band leader Paul Noonan is up their with the likes of Shane MacGowen, Bono, Glen Hansard, and Damien Rice, and Noonan's band Bell X1 are the driving force behind his lyrical creativity. With the bands latest record, Chop Chop, they linked up with Thomas Bartlett aka Doveman and Peter Katis who have been instrumental in producing the stark and heavy sound of The National early in that band's career. As the Bell X1 released Chop Chop last month, we spoke to Noonan about his bands Irish roots, working with their new producers and their songwriting process. Take a look at our interview with Noonan below:

How did the title, “Chop Chop” come into play when naming the new record?

It was something I threw out there before we made any music - we wanted it to be shorter, with fewer songs than usual. With less going on, drawn from a simpler palette.
We spent a while working on a lot of songs and ideas before recording for real, whittling them down to the better ones, and being pretty brutal about what was good enough and not.

You worked with longtime National producer Peter Katis, and National collaborator Thomas Bartlett for the new album. Were you influenced by The National to work with their constituents?
I think they're a great band, they're one of those that mine a deeper seam.

What was it like working with Bartlett and Katis?

We have loved a lot of the records that Peter has made, the colour of them, how things sit in the mix, his use of compression... it was amazing to watch him work at this. We'd be playing a song in the live room and would see him whirling about in the control room between the racks of gear and the computer, nipping and tucking, making it just so. We'd come in and listen...the skill with which he places elements in the mix is truly a marvel.
We were in his home too, and he'd oversee the making of hearty soups and killer chilli. He really made us feel like he was as invested in this as we were, that we weren't just one of the many bands passing through.

He was also a master of diplomacy - we had only two weeks to make the record, so all the ideas and directions flying around could not be entertained, but he managed to never say no.

We've known Thomas for a while through mutual friends, and have seen him play a few times with The Gloaming. I was really struck by what he brought to what I suppose is an Irish traditional music supergroup, the piano taking it someplace very different. Less yellowing pints of stout in harsh light, more velvet furnishings and fine wine.

He was effectively a band member for a lot of the recording. There's something very distinctive about his playing, his choice of chord inversions at points in a song...Peter would say that he "brings the sad."

What did you learn about yourself making this record that you never knew before?

Nothing that I didn't know I think, but it did reaffirm my faith in our intuition for where each of us is going, musically, when playing together.

I'm actually wary of thinking about it too much, the songs just came into being so organically and without a lot of talk or thought... the enemy, thought!

Six albums later, where do you find inspiration?
Humans are weird.

How would you define the sound of the band now as opposed to when you first started?

I don't know, we've been making it up as we go along... for us, the records are wildly different from each other in terms of who was playing, where and how they were recorded, our collective headspace... but I suppose the writing has always followed a familiar path, from Dave and I on our own to the rehearsal room. I do think we've become more honest about whether something is good enough to put out there, and less precious about dumping stuff that isn't.

How does “Chop Chop” stack up to your other records?

Well, I'd say it's quite a bit shorter in running time so while they may tower above it, it will punch them in the balls.

Hailing from Ireland, you recorded this record in Connecticut, did the change of atmosphere have an influence on your sound?

Not a whole lot of distraction in the part of Bridgeport where we were - a good thing.
There was the diner. I'm a sucker for the romance of the American diner - pancakes at 4am.
There was a Stop&Shop, the liquor store, Pepe's pizza. I'm sure they're all in there somewhere...

Hailing from Ireland, how much has your native country had an influence on your music?

I'm sure it has, in the writing... our version of the English language has a lot of phrases that are direct translations of the Irish language, which despite it's harshness was a more beautiful and lyrical language.

For example, "I miss you" in Irish is "Bhraithim thu uaim,"  I feel you from me. The oral tradition is still very strong and is absorbed by osmosis, living in this place.

With so many great bands from Ireland – U2, The Pogues, The Frames, and so many more, do you ever think about the legacy Bell X1 will have on modern Irish music?
Ha! I don't really. I don't think we sound particularly Irish, beyond some of the words. In the wake of U2 there was a lot of poor imitation going on, overwrought anthemic pub/celtic rock. I think we have moved from that stereotype of what an Irish band is, and there really is a lot of great and diverse music coming from here now

Where does Bell X1 go from here?
The band has become a kind of hub from which various side projects have sprung, so I'd imagine we might visit some of those after touring this record. The hamster wheel never stops...
Posted by Salvatore Bono at 6:03 PM