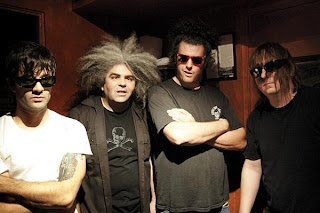 For the last four decades The Melvins have been thrashing their way through the music business. This year marks the iconic band's 30th anniversary and after 20 albums, various line-up changes, they show no signs of stopping, in fact, only gaining momentum as they ready the release of their 21st album, Tres Cabrones, which arrives in November. This will be the band's second release this year, after they released their covers record, Everybody Loves Sausage in the spring. We spoke to singer and guitarist Buzz Osbourne about being in a band for so long, their influence on other bands and what all of this means. Take a look at our interview below:

Being in a band that has been around for 30 years, how does it feel?

Uh, good? We've seen em come and go... How long until I can collect Social Security and live maggot like off of the state?

Being a band that has been influenced by so many styles and sounds early in your career, what inspires you today?

Life is an inspiration. I guess. Inspiration? God only knows.  I'm just happy to still be kicking.

Your latest album, “Everybody Loves Sausage,” is a collection of covers. How did it come about as to what songs you would be covering?

We picked mostly songs that we felt told our story. It's a long story filled with tension and broken promises. We are big fans of music of course and our weird fandom knows few limits.

Do the songs that you cover on this record have significance to you, or did you just want to take a crack at them?

I think it would be weird if they weren't significant to us in some way, after all its not just random. Actually that would be kind of cool, just draw band names out of a hat and record those.

So, does everyone in the band love sausage?

Of all the work you have done with The Melvins, which is your favorite and why?

I don't know really. Maybe Colossus of Destiny or the Bulls and the Bees... They're hip slick and cool but I could change my mind about all of that tomorrow.

This band has influenced everyone from Nirvana, Tool, Mastodon, Boris, and the list goes on. Being a band that is so influential, did you ever think you would reach this pinnacle?
Oh yeah, I always knew we would be way up top looking down on everyone. It's a great view from up here and now that I'm at the absolute pinnacle of success it's time for me to start giving back... I think the next thing for me is to set up a string of benefit concerts to try to raise awareness about some bullshit cause like freeing Tibet. Actually fuck that, I think I'm going to concentrate on getting women the right to vote.

What do you have to say about music today?

Same as ever really, some bands are good but most are not. Nothing's changed. I have to admit I find no love whatsoever for a DJ with a laptop or anyone who plays "proper" techno.

Who are some of the bands today that strike your attention?

I like Big Business and Tweakbird and this weird band from Seattle called Mudhoney...

The Melvins have seen all sides of the music business, from independents to major labels, do you ever feel jealous or angry, if not both, about how fast it is for someone to get recognized today, unlike when you started out starving for what you were doing?

Oh you bet I'm mad! In fact I've never been so mad. Fucking kids today and their bullshit, sometimes I just want to scream FUCK! Just fuck fucking fuck fuck fuck! What were we talking about again?

The Melvins have always done things on your own unique terms, what is the next trick up your sleeves?

Posted by Salvatore Bono at 7:06 PM