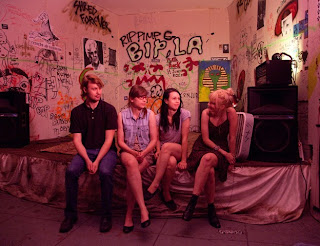 Something must be brewing in Canada that has surfaced from the underground on up. It could be the weather, politics, lifestyle, hockey, who knows. But for Canda's White Lung they join a new line of abrasive Canadian bands that simply ignite and destroy any stage they play. White Lung have been active for the last seven years, but the last two have been the most important, that is where they have been gaining much attention and acclaim online. We spoke to singer Mish Way about their Canadian roots, music, and being a woman in a male dominated genre. Take a look at our interview below:

There seems to be a slew of bands coming from Canada playing very angst filled music. Bands like yourself, Nu Sensae, Metz, and of course, Fucked Up, and others making this pulse pounding punk. What is in the water in Canada that more bands are taking on this sound?

I'm not sure. Maybe we are trying to challenge our Canadian reputation as overly apologetic nice guys who Americans can walk all over? Maybe we're just trying to get away from the whole Arcade Fire is Canadian rock image. We're trying to separate ourselves from Diana Krall.

Hailing from Vancouver, how much has your surroundings influenced your work?
I don't often write about our city. I write about human relationships, but I am in Los Angeles right now and yesterday I was standing outside the Chateau Marmont trying to steal their internet connection and the place was just so pretty. I said to my friend, "I want to make a record in a new city. Write it and record it." She asked if we could imagine doing it in LA and my immediate thought was like, "Well, then it would just a record about LA." Vancouver in itself is gloomy, but when the sun comes out it's like no other place. It's just so beautiful, everything is new and the buildings are all made of glass. But as I said, I write about people. I write about human interaction, so it's more the men in Vancouver if anything.

The band’s live shows are simply brutal, how do you manage to do this night after night?

I don't know how I still have a voice. I try to sleep a lot during the day, but I don't sleep much. Maybe 4 hours a night. I wake up at 8 am every day, no matter how late we have been out.

Do you consider yourself punk, garage, or hardcore or is it all in the same?

I consider ourselves a punk rock band, I guess. I mean, we are just playing what we know how to play together. It feel unnatural and limiting to categorize yourself. I remember when I was talking to Kim Thayll he told me that Soundgarden actively tried to resist the whole "grunge" label forever, but finally they just gave it because it was like, "Well, it's just easier. Even my grandmother understands what grunge is." Like, fuck it. Who cares. People can label us however they want. It's aggressive music with a strong pop backbone.

My grandmother Gerrie Way. She is the toughest woman who ever lived.

You recently toured with Iceage and Parquet Courts, what was that experience like?

Iceage were a pleasure and we made very great tour companions. They kind of hate everyone and we hate everyone, so the fact that we all got along so well was surprisingly nice. The first night in NYC, Elias  was going on about Taylor Swift, how much he loves her and I ranted about how she slut-shames and her music is annoying. The next night in Vermont, he shyly comes up to me and asks if he can decorate the stage for our set. Next thing I know, he's taping up all these giant pictures of Taylor Swift to the back drop. It was really cool. Then, I ripped them up when we played and tried to light them on fire. After that it was like, "Okay, these boys are cool. These boys are deviant little shits." We had lots of fun together and we very much respect them as musicians.

Woman and punk have always been a minority, are you trying to prove that female fronted bands can rock just as hard, if not harder, than the boys?

What has been the best thing about being in White Lung?

If you were not in this band, what would you be doing?

I am a writer, so I would most likely be at a magazine full time, instead of just freelancing, which is all I can do because of our touring schedule.

White Lung have gotten so much acclaim in the blogosphier and from us music journalists, how do you respond to the acclaim or do you not pay attention to that?
I am glad there are still some people in this world who can appreciate intelligent music. It's very flattering.
Posted by Salvatore Bono at 6:36 PM