Sad news to report, Jon Brooks, drummer for The Charlatans passed away at age 44. In a statement, the British band said, "Following a seizure on tour in Philadelphia in 2010, Jon had been receiving treatment for a brain tumour and had undergone several operations, although he had been working on new material with the band over the summer.. He passed away peacefully in hospital early this morning with his family at his bedside."

Japan's Mono will record a new album in the USA in November. The band hope to have the record out next year.

After burying the hatchet earlier this year, Damon Albarn and Noel Gallagher seem to be close friends according to Albarn's Blur bandmate, Alex James. James spoke to Hungry's Sziget Festival website before Blur's headlining set and said, "Damon and Noel Gallagher are working together on a lot of stuff, so whatever was back then is not relevant anymore. But we have to add that young bands today are all very nice. We were totally intolerable."

Albert Hammond Jr. of The Strokes has broken his silence following his bands terrible album, Comedown Machine, which was released earlier this year and featured no tour, no press, and hardly any promotion. Hammond told NME, "At some point we will do something and we will speak about it wholly and it will feel good. It just feels too one-sided or weird or not fun when it's not coming as a group effort, but everything's great. The Strokes are always open to... it's always going to have something. I'm not saying that's the word from the band, just that's how I look at it, how it feels - like we've gone past the point of not doing stuff."

Janelle Monae released the album cover to her upcoming record, The Electric Lady, which arrives next month. Take a look below: 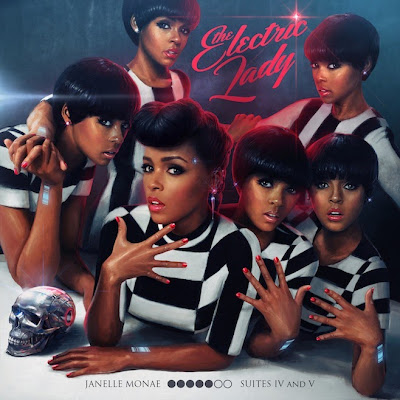 Posted by Salvatore Bono at 6:49 PM