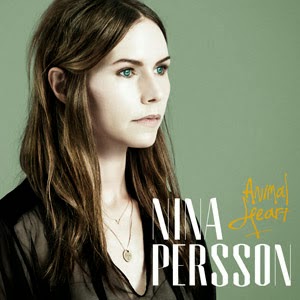 The voice of Sweden's Nina Persson is instantly recognizable. Her voice is inviting but vulnerable, it is hopeful but can be melancholy. The singer for The Cardigans and A Camp will release her latest solo venture, Animal Heart, next month and we had a chance to speak with her about her colorful career, new album, and what is in store for her down the line. Take a look at our interview with Persson below:

After all of these years, you are making your solo debut. What does it feel like?

It feels great! I haven't made records in my own name before since I've felt so good about being in bands and collaborations. Right now, it just feels right!

The name of the record and title track is “Animal Heart” what does that signify for you as an artist and as a person?

Just like always, I write a lot about how primitive we all get when it comes to love and sexuality, and I think that the title sums that up quite well.

What was your biggest inspiration making this album?

Just revisiting my own roots, the ones that formed be before I joined the Cardigans. 80's radio pop!

What did you do differently on this record that you did not do before?

I used a lot more keyboards and synthetic drums. I have no guitar playing band member tied to me, so I could just experiment with other instruments than I have before.

A Camp released two fantastic albums, granted there was an 8 year gap in between records, will there ever be a follow-up to “Colonia?” If so, will it be in another eight years?

Hehe, hopefully not 8 years again, but I hope we'll make more A Camp-music! AND solo stuff AND Cardigans, I want to do it all.

The Cardigans have been an on-again-off-again touring band for a number of years, will a new studio album ever happen?

Maybe! After we started playing together last summer, we have gotten really excited to do make new music together again. We'll just have to figure out the logistics, since I live in NY, one guy is back and forth between Stockholm and LA and some are in Malmö.

Which do you prefer – being a solo artist or working with a band?

I actually do a lot of thinks as if I were with a band, even when it's a solo record. I'm never alone. But I do love my bands and I realize how much it has colored me that I practically grew up in bands.

You have been living in New York City for a number of years, how has the city inspired your work?

It's just nice to be in a new place and I think the total non-conformity and mix of people has been good for me. I've met a lot of new great musicians and I get to bounce off new surfaces all the time.

Hailing from the pop capitol of the world – Sweden, do you still follow the Swedish music scene even though you are away from it?

Not really, although I don't follow much music at all! I need to get better at that.

After being in the music business for so long, what advice would you give to any new artist emerging hoping to live out their rock and roll dreams?

Hm... These days I think it's more important than ever to really try to find what's really your own. But I don't know really, everybode need to make their own mistakes, I'm afraid.

After all of these years making music, what is your fondest memory?

Can't pick out one! I have really had great times and harder times.

Once ‘Animal Heart’ comes out, what is next for you?

I'm gonna tour with the record, in Europe and in the U.S. Hopefully do festivals during the summer, and then maybe just tour some more.

Pre-Order The Album Here!
Posted by Salvatore Bono at 3:03 PM