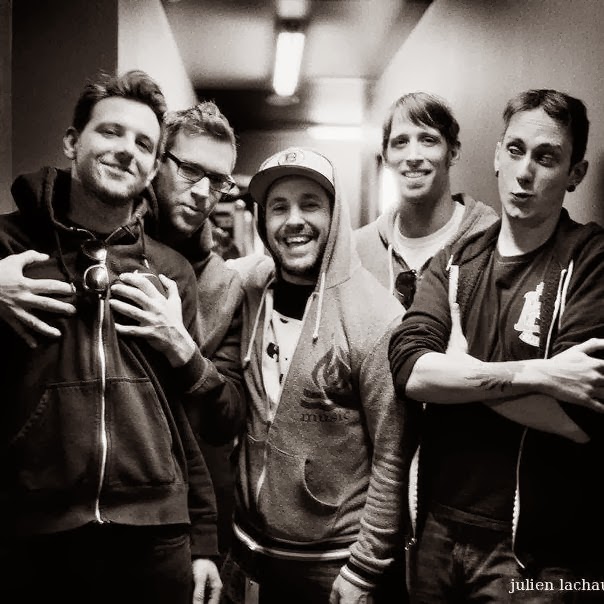 Since 1996, in one form or another, the members of New Bedford, Massachusetts, hardcore outfit A Wilhelm Scream have been slaying fans around the world with their abrasive style and chaotic live shows. With a slew of fantastic albums under their belt, they released their first record in five years, Party Crasher, last fall and have been on the road supporting their latest efforts. With various line-up changes through the years and different record labels and scenes, one thing has stayed constant in the world of A Wilhelm Scream and that is their devotion to their band and love of their craft. We spoke to bassist Brian Robinson about their history, latest record, and what has gone on in the five years they were not making new tunes. Take a look at our interview below:

This is the longest gap you have had between records, what took so long?

Well, we put in a LOT of time pulling it together - We started the record without the knowledge of what label it was going to be on. It'd had been so long since both "Career Suicide" and the self-titled EP that we had to move forward by ourselves. My take on the situation is just this; we wanted to continue recording ourselves after the EP, but we wanted the next full length to match up with the fidelity of that of the Blasting Room - In case you didn't know... recording gear is not cheap by any means. We had to tour our asses off in the middle of the recording to develop not only the quality of the record, but also the quality of the songs themselves. In the long-run, there was no other way around taking this long, and it was a labour of love for each and every member of the band.

You recorded Partycrasher on your own and in your own studio, was this the plan all along? To go in and just listen to yourselves and no outside influence?

It was always the plan to record at Black & Blue... Trevor and Mike are very passionate about advancing as producers/engineers. As for having no outside influence on the last record is absurd. No great musician will ever progress off their own steam. It takes the outside influence to become a better player and songwriter.

What did you do on Partycrasher that you have not done before?

I feel like, lyrically it's the most sing-a-long-ish thing the band's ever done. I feel like Trevor progress from (already being my favourite lyricist in our genre - I felt that way before I joined the band) previous records to find a solid ability to write some great "hooks" within his already introspective lyrics.

What did you learn about yourselves when making Partycrasher that you didn’t know before?

That our band can drink almost as much coffee as Bill Stevenson/Descendents.

Calling the record Partycrasher, does it signify your return to music after seven years away?

Not really, it wasn't the main idea behind the title. (We have a song called "Partycrasher" that will hopefully at some point see the light of day. ALTHOUGH - that preconceived notion is RAD, and I will start telling people that if the question comes up again.

Trevor has been known to be the principle songwriter in the band, did that change this go around?

Mike really stepped up his songwriting game on the record, there are 2 tracks that he pretty much wrote the entire song/lyrics... I won't tell you which ones. But I think anyone who likes the songs should give him a nice big hug and tell him that "everything is going to be okay".

Even though there has not been no new material, you still tour your ass off, as you get older, do you still love touring like you did?

Well, we're all in our 30's, life's changing, priorities have changed - there's houses, fiances, kids... all that stuff, but the way that I look at it is that we've kinda reverted back to the original thought of just loving to get up on stage and have fun. Those 30 minutes to an hour that we'll play still mean the same to us as they did when we were all 16.

This is your fourth album under the AWS name, four albums in, what are your influences?

This band has a cult like following of fans all around the world, where is your favorite place to play? Outside of New Bedford of course!

Groezrock in Belgium. The Fest in Gainesville. No doubt about it.

Playing in front of so many different faces and crowds, do you notice a difference in audiences around the globe?

Not really! They're kids who love punk rock, and love music. I think our fans are the nicest, most polite kids... they don't mind saying hi, we don't mind saying hi back. It feels like most of the kids that come to our shows are people that I'd sit and have a beer/go bowling with.

Tour our asses off on "Partycrasher". Talk about dogs and food. Maybe tell a few jokes here and there.
Posted by Salvatore Bono at 10:55 AM