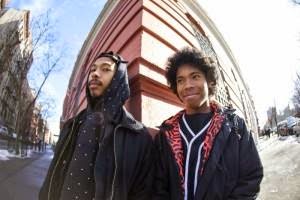 One of the most anticipated tours of the summer is Deftones / Incubus' co-headlining outing with Death from Above 1979. There is another duo on the bill that may be young but have proven to be worthy of touring with such modern rock icons. That band is California duo, The Bots, who released their debut, Pink Palms, last year and have been turning heads wherever they go. From Zane Lowe to The Guardian to Seth Meyers, to Walking Dead's Norman Reedus requesting to direct their latest video, The Bots are poised to be one of rocks next big acts. We spoke to the members, Anaiah and Mikaiah Lei about coming of age, their music and the buzz around them. Take a look at our interview below:


In recent years we have seen so many duos emerge, (bands like The White Stripes, Black Keys, Death from Above 1979, Royal Blood) how do you try to differ from the rest?

Mikaiah: I love The Whites Stripes before I even got into Death From Above. They are two two-piece bands that sound nothing alike but have a lot in common that's how I view what we are doing.

Anaiah: As they have all managed to differ from one another, we're doing the same. We are doing what we wanna do, just like The White Stripes did what they wanted to do. And I respect and acknowledge them for that.

You are living your rock and roll dreams at a young age. How is it dealing with all of the new exposure?

M: I do feel like we are living our dreams but I don't allow myself to feed into the press or media stuff. Ignorance is bliss.

A: We've worked very hard to get where we are and we still have a long way to go. Very blessed to have the exposure that we do have. ♡

Who came up with the idea to call yourselves The Bots?

M: I did I high school with 2 other friends at the time. Nothing else to it haha

Hailing from California, how much has the Golden State influenced your work?

M: I've has influenced much of my work, I don't really think about where I live I just love there. I influenced by life and other experiences.

A: Well Los Angeles is home, you could always find inspiration from home. Even if you don't believe so, it's possible to.

When you are not playing and recording, what do you do for fun?

M: I live a very boring humdrum life, I wake up around 7:00 7:30 every morning stretch, meditate, exercise and I play music throughout the day. It's my only hobby but I don't get bored because I play multiple instruments. If I find myself tired of playing guitar I can play keys, after keys I move onto drums, drums to the bass, bass to ukulele the list goes on.

Do you still feel you are living normal teen lives?

M: I've been a young adult for a min now so it's hard to answer that question, my teenage year were very different from others I went to school with. I felt like an outcast although I had friends.

A: Well considering Mikaiah is 21 going on 22, and I'm sadly exiting my teen years shortly. I feel like I'm just living a youthful life. I get into shenanigans and all that. A normal teenage life that I'm aware of is stuck in technology. Which I try not to be.

So many young bands have been coming through the ranks in recent years as well (artists like Unlocking the Truth, Radkey, Jake Bugg). What is it about the new class that inspires you to craft rock and roll?

M: I don't feel inspired by the new class, I try not to pay to much attention to what's happening around me, although I am conscious of it I just don't involve myself in the new music as much as I could. It's nothing against new artist that are coming up, I just focus on myself and what I am working at first.

A: There's finally a surge of bands coming up that aren't starting in their late 20s. Age should never play a factor in the music. We make music because we want to make music. It's our passion we thrive and excel from it.

In an era when not many American bands are coming of age like you guys, who are your biggest inspirations for wanting to do this?

M: I looked to Bob Marley, Nirvana, bunch of oldies groups. Our parents have inspired us in a sense but I feel as if it's something I've always wanted and I've been very lucky enough u work at it.

A: Well we've always wanted to do music, ever since we were very young kids. The White Stripes was in fact a massive influence on us though!

From Seth Meyers to The Guardian, you are being discussed all over the world. What is it like?

A: It feels truly wonderful to be recognized as artists around the world. It really is a strange feeling but just feels so good.

How did you end up landing Norman Reedus in your latest music video? What was that experience like?

M: He wanted to make a music video for us and we went with it. He was lovely, super funny and charming easy to work with. Nothing negative to say about him.

A: He hit us up to do the video. It was awesome getting to work with him. He was very spontaneous and knew almost exactly what he wanted!

After releasing Pink Palms last year, things became such a whirlwind for you. What is next for the band?

M: Things feel the same but I've notice more people taking a liking to us which is awesome. We will be playing more shows and tour the album still. And in the future another album to come

A: We're writing a new album at the moment, and we'll be touring more! Very excited about what the future.

Posted by Salvatore Bono at 2:02 PM