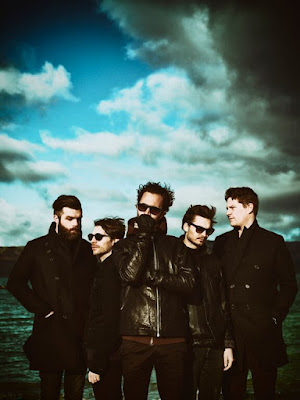 This month, Editors released their fifth album, In Dreams. It marked the first time the British band self produced a record and tried to find their footing following the tumultuous period when founding member Chris Urbanowicz left the band in 2012 and they released The Weight of Your Love. Now, the band are back and seem to be in a place that not only has them inspired to push their sound and direction but look to make the future a brighter place. We spoke to members Edward Lay and Elliot Williams about their new record, regrouping and hoping to make a return to America after a five year hiatus touring in the States. Take a look at our interview, below:

The new record is called 'In Dreams,' what does the title signify?

Elliott- A lot of Toms lyrics on this album have references to dreams. Also we recorded the album in total isolation in a remote part of Scotland's western Highlands. The ever changing hourly spectrum of weather from snow, storms and glorious sun lent its self to a dream like atmosphere where time seemed to disappear. In Dream seemed appropriate.

This is the first record that you produced on your own, what was that experience like?

Elliot: When we went up to Scotland originally we went with the intention of writing and demoing. As the songs started to develop we slowly realized we were accidentally making the record!

Why did you opt to go solo on the production end and not get someone behind the decks?

Elliot: We felt like bringing a producer in the studio or going to a "proper" studio would kill the atmosphere and vibe we were creating in our make shift set up. The 5 of us working collectively bouncing off each other ideas was working really well. Bringing a producer in could of changed that dynamic. It became a really equal input and creative experience.

As this band has evolved through the years, there has been a shift in sound and style and the fans have responded to it in ever fashion. What causes the shift?

Elliot: I think that as a band you always want to push forward and progress. Although the albums do shift, there are still direct links between all of them. I think the Weight Of Your Love will always be seen as the most drastic departure due to the nature of the circumstance. The band had been through trauma losing a member in Chris and gaining two. It was very important for Editors with myself and Justin to become a band again in the traditional sense. So that record was very much a rock record with a band in a room vibe. On In Dream the roles were much more open and less instrument based anyone could contribute anything on any instrument. We don't really set out with a plan, concept or set direction on any record. It's cliche but you just go where the music takes you.

Five albums in, what still inspires you?

Ed: With every album we release, there comes a time to reflect on its sound and what we would like to try and get out of the next record. That is sometimes inspiration enough, as we have never got to the end of a year thinking that we have done enough and don't need to try again. The band now feels the most collaborative it's ever been, so we are obviously inspiring each other also.
Crafting this album, what is one thing you learned about yourself musically that you didn't know or acknowledge before?

Ed: That I could play keyboard and the other band members wouldn't laugh too much.
Since the beautiful and underrated "In This Light and On This Evening," guitars seem to be taking a backseat in Editors sound and synths are more prominent. Why is this? Will there ever be a return prominent return to the axe?

Ed: We love guitar, and have used it in important ways on the record. But we didn't want it to be the main focal point on most of the songs,  it had to be necessary and enhance those moments it appears in. We treat every instrument the same though- there is only one real drum kit on the record, and it came in the last song as a bit of punctuation into the big outro of Marching Orders. It's not like they won't feature on future editors records, and that goes the same for the guitar.

It has been 5 long years since you toured America, when can us fans here expect your return?

Ed; It just didn't work out on the last record for us coming to America. We all enjoy touring in the states and all want to come back- it's just a shame it's been such a long time for us. Nothing is for definite, but if there is an appetite for us from the fans, old and new, to come and play some shows we would love to.
In 2013, the band said they almost split up, what is the moral like now? What drove you guys to the brink and back?

Ed: We had a torturous time of it back then. We were going over new material but never really agreeing on anything, and to not be productive as a band is the worst feeling. We managed to get two new members in and became a band again, creating a rock album that we could play in a room and got to know each other. This new album is based on that new bond we created, the trust we have in each other's musical opinions and tastes. Spirits are high.

Where do Editors go from here?
Ed: We have a huge tour which starts on Friday 9th October. The record hasn't been out a week yet and we are going through all the emotions that having new material suddenly available brings. We feel like we have been at our most inclusive and creative on this record, so we just hope that will continue onto the live shows before we start to look at the next load of music.