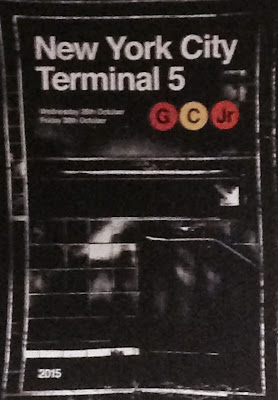 On one of the wettest nights of the year, 3,000 New Yorkers crammed into Terminal 5 as one of their hometeams was playing in a World Series match and another was having their season tip-off. It was a night when anyone in that room would have wanted to stay home and lay on the couch but they ventured out. Why? Because one of the greatest living guitarists was in town.

At 9 p.m., Austin native Gary Clark Jr. took to the stage with a confidence swagger for the first of two sold-out New York City gigs and tore the roof off the place.

Opening with "Bright Lights," the singer and guitarist, backed by a band that looks like they were members of Jimi Hendrix's Experience, brought their rock and soul sound to The Big Apple. The thing about Clark is that his band may look like the Experience, but if you close your eyes and listen, they, along with their leader, are the modern day version of Hendrix and his men. Clark makes guitar playing look so easy. He makes his six strings speak in a language that is beautiful to anyone's ear and native to anyone's tongue --that is because he is using the power of soul to make the sounds.

Combining garage rock, traditional R&B, and blues, the Austin guitar phenom is a hero to anyone who relishes in old time rock and roll with a new school twist. No wonder everyone from Keith Richards to Dave Grohl wants to play with him.

While on the road in support of his latest, The Story of Sonny Boy Slim, the 31-year-old kept to some of his hits from Blak and Blu while featuring Slim songs in between including a breathtaking version of "Church." Taking a queue out of Zeppelin's book, he and the band nearly extended every song to a long jam that would hear less singing and just straight playing while the fans lapped it up.

At one point, Clark noticed a fan who held a sign asking to play with him and the guitar hero obliged making the fans night by bringing him on stage. Even handing the gentleman his guitar off his shoulders in the process. It was a night that audience member will never forget and a night that everyone in the room witnessed something special because this may be the final time they see him in a venue of this size. I predict it will be Radio City if not Madison Square Garden next. He sure has the chops to do it.
Posted by Salvatore Bono at 6:09 PM