David Bowie will release his new album Blackstar in January, exactly two years after he released his first album in a decade The Next Day.

Speaking of David Bowie, Oscar winning director Danny Boyle has been trying to develop a musical about The Thin White Duke for years and it is currently in a strange place because he can't lock down the music rights to the project, which has forced it to be shelved for now. Boyle told Happy Sad Confused: “It’s a wonderful script, by Frank Cottrell Boyce. It’s a sort of musical, but we couldn’t get the music rights. I didn’t want it to go down the route of ‘Velvet Goldmine,’ which couldn’t use the music, and used different music, and fictionalized it and stuff like that. So, we had to put it away for the moment. It’s a beautiful piece, and I hope we’ll be able to return to it. I’d love to do this film. It’s not really a musical, but it is [laughs], so we’ll see.”

Band of Horses have confirmed that they are finishing up their new album which has been produced by Grandaddy's Jason Lytle. It will be released this spring.

Common has signed on to play the villain in John Wick 2 which will star Keanu Reeves.

Roots bandleader and self proclaimed 'foodie,' Questlove is writing a book on chefs called something to food about: Exploring Creativity with America's Most Innovative Chefs. It will be out in April.

Speaking to i-D, Adele gave her first interview about her new album, 25, which arrives in November. In the interview, she said how motherhood has made her cut the drama out of her songs. "I used to f------ love the drama of all of it, but now I'm a mum I only have so much head space. I've got to clear a lot of stuff the f--- out, which is really therapeutic, 'cause I can really hold a grudge. Life is so much easier when you don't hoard your past."

Could Stone Roses be crafting a new album? In an interview with Soccer AM, Noel Gallagher said he has some insider interview and gave a coy response when asked if the iconic Manchester band are making new music. He said: "Yes. I know exactly what's going on... They're blooming."

Baroness will release their new album, Purple, in December, as previously reported. The band released the album cover, take a look below: 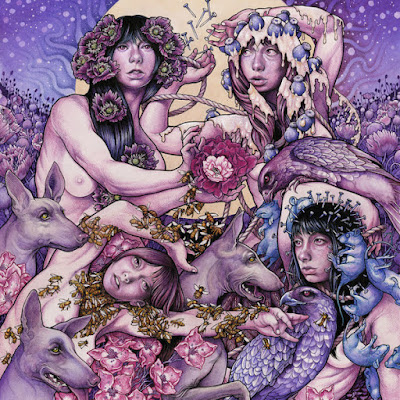 Posted by Salvatore Bono at 5:42 PM