Paper magazine this month has enlisted rappers of today talking about the influence of rappers of the past. Kendrick Lamar has written about Easy-E, who said: "I wouldn’t be here today if it wasn’t for Eazy and I wouldn’t be able to say the things that I say, talk about my community the way I talk about it, for good or for bad. He’s 100 percent influenced me in terms of really being not only honest with myself, but honest about where I come from and being proud of where I come from.”

For the same Paper feature, Eminem wrote about 2Pac, who said: "He was taking things further than a lot of rappers at the time -- pushing it to the next level as far as giving feeling to his words and his music. A lot of people say, "You feel Pac," and it's absolutely true. The way he chose which words to say with which beat was genius; it's like he knew what part of the beat and what chord change was the right place to hit these certain words... to make them jump off the track and make you feel what he was saying. Like, listen to "If I Die 2Nite." Whatever he was rapping about, it was urgent. If it was a sad song, it'd make you cry. But there were a lot of different sides to him: fed-up, angry, militant, having a good time. His spirit spoke to me because it was like you knew everything that he was going through, especially when he made Me Against the World. You just felt every aspect of his pain, every emotion: when he was happy, when he was sad. His ability to touch people's lives like that was incredible."

Matt Cameron of Pearl Jam and Soundgarden is teaming up with Alain Johannes formerly of Queens of the Stone Age and Them Crooked Vultures, Dimitri Coats of OFF! and Burning Brides, and Matt Shepard of Soundgarden in a new band called Ten Commandos. The band will release their debut next month.

The city of Boston has declared today "Patti Smith Day," the mayor announced the news yesterday on Twitter:

I declare October 10 to be Patti Smith Day-grateful for her artistic contribution, leading the way for women in rock. pic.twitter.com/DUTM649SSX
— Mayor Marty Walsh (@marty_walsh) October 9, 2015


Radiohead's Johnny Greenwood will release Junun, an album he made in India with Israeli composer Shye Ben Tzur earlier this year. The record arrives next month, take a look at the cover, below: 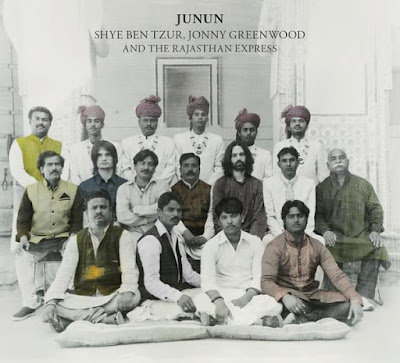