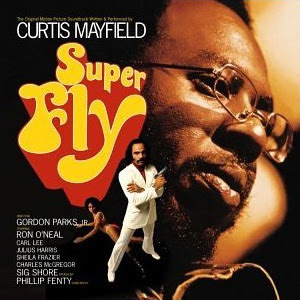 Curtis Mayfield was only two albums into his career before he did the soundtrack to Super Fly. The music and sound Mayfield crafted for the famous Blaxplotation film of the same name became a staple to funk, soul and R&B for years to come. The soundtrack became so wildly popular when it was released in 1972 that it outgrossed the film in terms of financial numbers and even bolstered two massive hits, "Freddies Dead" and "Super Fly."

Thanks to it's socially aware lyrics about drug use, poverty, racial injustice, it helped launch the idea that soul and R&B music can have concept records. Along with Marvin Gaye's What's Going On?, the records were a benchmark for social and conceptual R&B records of the 70s and cemented their status as legendary.
Posted by Salvatore Bono at 8:44 AM