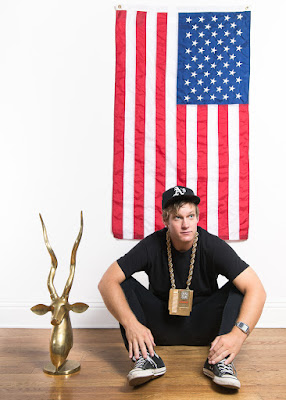 If you are white and a rapper, society qualifies your music inside two categories -- a guy trying to be Eminem or a guy that will fall by the wayside like Asher Roth and Vanilla Ice. For MC Lars he is not gunning for either spot and carving out his own path. By coming his love of literature and nerd culture, Lars is making a name for himself by being himself. We spoke to the emcee before he releases his new album, The Zombie Dinosaur LP. Take a look at our interview, below:


When people think of rappers, everything that you do does not come to mind. How do you respond to that?

Thanks!  I try to be myself and keep it original.  Hip-hop has such a rich, deep history with a lot of artistic variation and diversity.  I'd like to think that a song like "Forgot About Jack" would sit well next to KRS-One's "You Mist Learn".  Rap has always had an interesting, educational component since the 70s.

You were an English lit major at Stanford and then studied Shakespeare at Oxford, since hiphop is a take off of poetry, did you find that these were your roots to writing lyrics?

100% - my first rap was a Shakespeare song in high school and studying literature really inspired me to express myself in the way that I have.  Being a literature major is about thinking in metaphors and having a concrete thesis with every piece you back up repeatedly, not unlike a chorus.


You mix writing icons like Kerouac and Poe and mix it with Game of Thrones references - what else drives your source of inspiration?

I like to write about anything that's interesting to me and not limit myself.  If I can have a unique take on something and spin it in a way that's never been done, then I do, and the curiosity to create something different really drives the creative process.  "Dragon Blood" is a song about the victorious underdog, everything I write carries on in that thematic tradition somehow.


From your work to The Hold Steady to Death Cab For Cutie to Sage Francis not to mention The Beatles and Dylan, many musicians have been influenced by Kerouac. Why do you think this is?

I think there's something romantic about the wandering writer, capturing his world in such a personal and passionate way.  Any touring musician can deeply relate to him.  He also has a very musical prose and the way he and the Beats helped usher in the counterculture movements of the mid-20th century had a huge effect on literally every type of underground music genre to emerge in the 60s until now.  He was the 2Pac of his generation.


You titled your latest EP after Edgar Allen Poe, what do you think he would think of hip-hop?

Poe was very obsessed with writing verse in a musical way and reading his poems aloud. He believed in the magic of the sound of words and spend hours and hours crafting his meter and flow.  He would have loved Fetty Wap and probably even made him a character in "the Tell Tale Heart".


What can you tell us about your upcoming album, Zombie Dinosaur?


It's my fourth full length, and is a return to the pop culture-inspired themes of some of my previous works, with collaborations with Watsky, Kool Keith, Roger from Less than Jake and more.  Topics range from everything from Star Wars, the Simpsons, Roger Rabbit and hipster parenting.  Special guest appearance by my Dad on the album too.

If dinosaurs entered the world of The Walking Dead, how would Rick and the gang try and survive?


I'm not sure that they would!  But it would be an amazing series finale, that's for sure.

Where did the stage name MC Lars derive from?


"Lars" was a the name of a German counselor character in Judd Apatow's 1995 summer camp movie "Heavyweights".  There is a scene where Lars DJs the awkward camp dance and acts ridiculously.  He's menacing but funny and I thought the name "Lars" was amazing.  I added the MC in high school and there you go.

After a decade doing this, what still motivates you?


I love creating things and don't think I'll ever stop, even after 12 years of touring.  I'll probably tour less in the future, but I'll always find time to make music and art as long as I'm alive.  I'm very fortunate that rapping has paid all of my bills since 2005.

We are working on a kids' hip-hop puppet show called "Yes Yes, Y'all!" that teaches kids about literature through music and robots that time travel.  Look for it sometime in 2016!