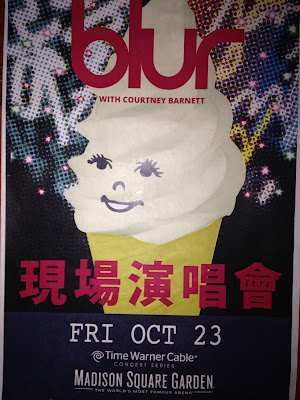 On-again and off-again for the last 25 years, Blur finally made their triumphant debut at The World's Most Famous Arena -- Madison Square Garden.

The band, who released their fantastic new album, The Magic Whip, earlier this year, returned to New York for their largest solo headlining slot to date in North America. This wasn't a festival, this wasn't an appearance, this was all Blur all night.

Hitting the stage at 9 p.m. sharp and backed behind giant neon ice cream cones and Lost-inspired Dharma octagons, Blur got a heroes welcome as they opened with "Go Out," but it was "There Is No Other Way," the second song of the night that was played to deafening applause since it wasn't just six months old to the audience's ears. While the show was in support of The Magic Whip, it was the older, classic songs that were never played in a room this big in the U.S. that everyone desired. Especially since the last time Blur played a majority of those songs with their original line-up was 15 years ago.

"It's only taken us 25 years to get here, but, as I keep telling myself, better late than never." - Damon Albarn of @blurofficial. #BlurMSG #Blur
A photo posted by Madison Square Garden (@madisonsquaregarden) on Oct 23, 2015 at 6:26pm PDT

Damon Albarn has played The Garden once before, just five years ago with Gorillaz but now it was time to bring his "other" band to the stage. "Well, this feels good! Its only taken us 25 years to get here. Better late than never," the front man said just a few songs in. He told The New York Times earlier this week that this was something he wanted the rest of his band to feel.

They certainly felt it and so did the crowd. In a career-spanning two-hour set that featured everything from new songs like "Lonesome Street" and "Thought I Was a Spaceman" to the classics like "Boys and Girls," "Tender," "Song 2," "Coffee & TV," "End of a Century," no one could forget this occasion that was 25 years in the making.

For some, it was the first time they were able to experience Blur live. For others, it was a trip down memory lane, yet, while they played through their musical timeline, it was clear that as they got older they got better. If The Magic Whip is Blur's alleged final record or the beginning of something new, the next chapter of their careers, this is was a benchmark gig for them.

As they sang their final song, the epic "The Universal," it was a moment to savor. As Albarn sang: "This is the next century / Were the universal spree / You can find it anywhere,"it was an echo of the sentiments that were being felt around the large room. It really, really did happen.

Posted by Salvatore Bono at 7:54 AM