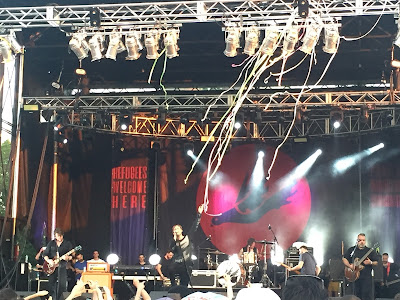 After announcing they would reunite after a six year hiatus, Thursday brought their reactivation to the final day of the annual Northside Festival in Brooklyn. The band headlined a very hot evening in McCarren Park on the first extremely hot day of the year.

As the temperatures spiked over 90 degrees, the New Jersey band found a way to turn up the heat and close out the festival's ninth year in fashion. 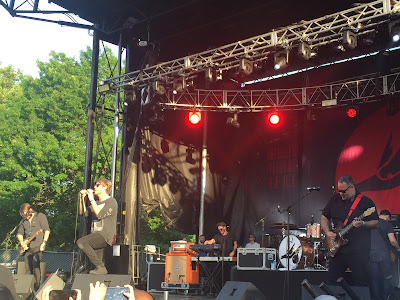 Taking the stage just after 7p.m., singer Geoff Rickley, who now lives in Greenpoint, Brooklyn, said that he was proud to walk to the show and live in a Polish neighborhood that has Jewish delis, Halal restaurants, and thrilled that New York City is still a melting pot now more than ever in the era of Trump. They then broke into "Autobiography of a Nation," which had fans rushing the stage as they saw a flock of inflatable doves get released into the sky.

The Northside Festival show marked their first concert since their reunion tour earlier in the year which ended in April at Irving Plaza. The members of Thursday are now older, have full time jobs, families, but still pack the same punch they did when they were in their early 20s. 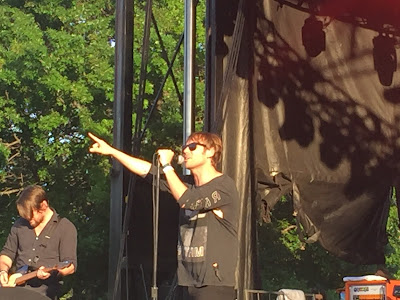 They focused more on songs from their albums Full Collapse and War All the Time but still managed to sprinkle in tracks from A City by the Light Divided, Common Existence, and No Devolucion. As songs like "For the Workforce (Drowning)," "A Whole in the World," "Counting 5,4,3,2,1," "Cross Out the Eyes," were played, the fans beat the heat and managed to have the time of their lives. In many ways, it was as if the post-hardcore band never left after the release of No Devolucion six years ago. 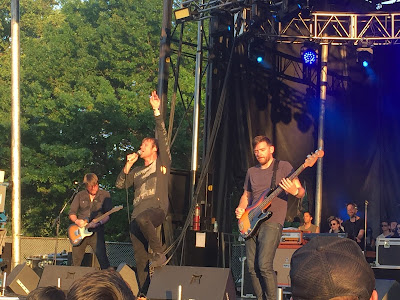 A humble Rickley thanked his family and the band for keeping his life together and admitted that he never though the band would reunite or if they were even friends still when they split in 2011. Yet, the singer was humbled that his music still resonated today and they still had the audience they loved which loved them back.

Read Our 2009 Interview with Thursday 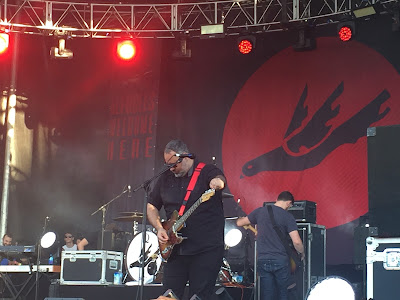 As whatever comes next for the band is still up in the air, this might be the stepping stones to something more. If it is not, then the band have cemented their legacy and no matter what they do, their fans will still come out, no matter how old they may be getting or hot the day may be, the community they have built are still very much supportive of what Thursday has to offer.
Posted by Salvatore Bono at 7:13 PM