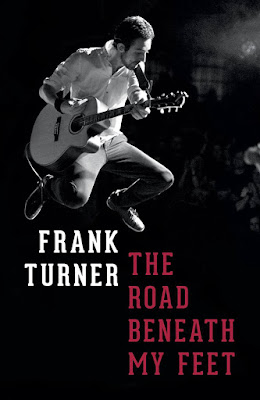 Frank Turner is constantly busy. The singer / songwriter always seems to be on the road and when he is not on touring, he is writing and recording music so he can go tour. Yet, in 2015, he managed to squeeze in a book about his life and career.

Read Our 2012 Interview with Frank Turner

Turner, who used to front the hardcore band Million Dead, opens the book with the end of the British band and how he had to figure out what he was going to do when they wrapped up their 2005 tour. After getting home, he started making music on his own and would become more successful as a solo artist singing punk and folk tunes than he did screaming his face off in the hardcore band. The Road Beneath My Feet chronicles his life couch surfing to playing to no one at gigs to headlining some of England's biggest arenas and then the world's biggest stage when he performed as part of Danny Boyle's 2012 Olympic opening ceremony in London.

Listen to Our Essential Frank Turner Playlist on Spotify!

Turner chronicles the drug fueled parties he attended to the shoulders he has rubbed against to sleeping on floors and trying to not get ripped off doing what he loves -- making music. If you are thinking about being in a band or want to go be a solo artist, this is the text book.
Posted by Salvatore Bono at 6:18 PM