Live Review: U2 at MetLife Stadium 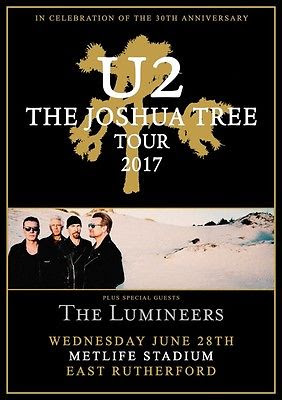 "We must be awake in order to dream," Bono told the crowd at New Jersey's MetLife Stadium during the first of two sold out shows at the venue. Dreaming happened to be the motif that carried U2 through their setlist as they finally brought the Joshua Tree 30th anniversary tour to the New York-area.

Listen to Our Essential U2 Playlist on Spotify

The Joshua Tree, the Irish band's landmark fifth record was about America. The America for the fortunate and the desperate. The American dream and if it still was alive in Reagan's country. It was about the idea that four dreamers from the North Side of Dublin could become the biggest band in the world. Nearly all of the dreams that U2 set out for they have achieved and the America they wrote about 30 years still faces many of the same problems it did then as it does today. It wasn't a political record but an album about everyday people trying to achieve a common dream -- truth, justice, prosperity.

As the band have aged, the songs have stood the test of time and many of them were played for the first time in 30 years in Jersey on a picture perfect summer night. 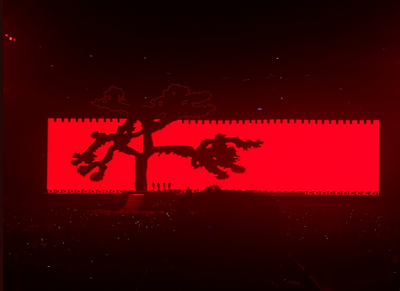 Walking out to The Waterboys' "Whole of the Moon," the band took a stage that mimicked the shadow of a 45-foot tall Joshua Tree that stood proudly on the stage as it was connected to a 750-foot-long screen.

The houselights went down and on the "Tree Stage," U2 thunderously opened with "Sunday Bloody Sunday," and "New Year's Day," as their main staged loomed in the background and the massive Joshua Tree haunted them. The spotlights were on the band on the annex stage to symbolize some of the early clubs they played -- even though this is one hell of a massive audience that could not physically fit in any club. The story of this tour lies in the setlist as Bono introduced "Bad," which has not been played in New York in decades, he talked about how they were a garage band that started playing in America at clubs like New York's The Ritz, now Webster Hall, and how there were "17 people there." The first four songs, including "Pride (In the Name of Love)," were all the songs that helped U2 get to The Joshua Tree record and create it, the next portion of the night would be the album itself.

Embracing their legacy, the band played their seminal album from cover to cover. As "Where the Streets Have No Name" began, the massive screen behind them on the main stage turned red like it did on the first tour of the album. High def visuals of American landscape went with every song used and were created by French artist JR and longtime U2 photographer Anton Corbijn, both of whom were in attendance Wednesday. 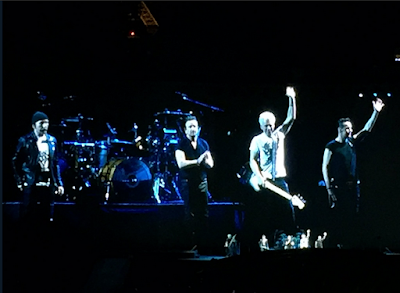 The record came alive for the first time in three decades and after each song, the band would embrace each other as if they just won a World Cup. The dream they wanted to achieve when they created the record that would define the 1980s and their career was achieved and it grew up before our very ears. "These songs don't belong to us anymore, they belong to you," Bono said.

The 11 songs shook the MetLife to its core and emotions ran wild for each person in attendance. For many of the songs, especially the slower tempo ones like "Red Hill Town," "Running to Stand Still," "Mothers of the Disappeared," Bono's voice has never sounded better. The band looked fresh and vibrant as if the tour, just 19 nights in on a 21 stop North American leg, has not affected them. Bassist Adam Clayton smiled throughout the show and notable quiet bandmate, drummer Larry Mullen Jr., was in a playful. Yet, like the record, the talents and musical wizardly of The Edge sometimes overshadowed Bono's massive spotlight.

After the 50 minute runtime of The Joshua Tree, the band retreated for a quick break and returned for a seven song encore. The third act of the two hour gig was the songs that brought them success and creative spark post-Joshua Tree. Opening with the poignant "Miss Sarajevo," the song about a woman growing up in the conflict in Bosnia in the 90s which they had done with the late Luciano Pavarotti (whose voice was used on a backing track for the 2017 live version) was altered to be about a woman growing up in refugee camp in Jordan. As visuals of the camp were shown, a banner of the young lady was carried in the lower bowl of the stadium. It was then onto the hits like "Beautiful Day," "Vertigo," "Elevation," before they got serious again.


Bono, who would thank everyone in his crew, band, the audience but also the families of his band and his family, notably the women. Addressing that the future is indeed female, they dedicated "Ultraviolet (Light My Way)," to all the women in attendance. 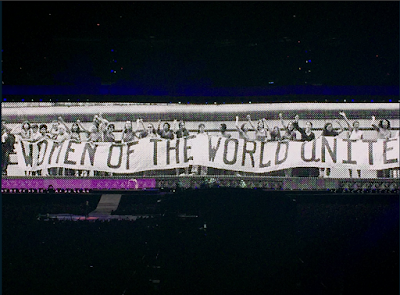 Closing with "One," and the brand new and unreleased song, "The Little Things That Give You Away," it was time to say goodnight to The Joshua Tree so that it may be planted in the hearts and minds of another crowd for another show.

"Thanks for giving us a great life, thanks for sticking with us," Bono said multiple times during the night as he has said many times in the past since the Vertigo tour of 2005/2006. That great life is the dream realized, the dream four young guys from the North Side of Dublin took a risk to try and achieve.

History will say they did. Proudly.
Posted by Salvatore Bono at 7:34 PM