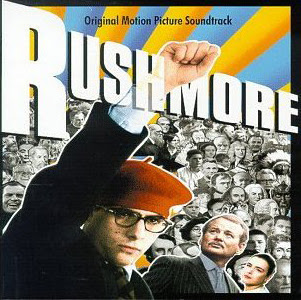 In 1999, Wes Anderson's second film took audiences and critics by storm. Rushmore was the story a privileged teen filled with angst trying to get what he wants -- attention from a woman. While the film was a success and launched the careers of Anderson and star Jason Schwartzman to the main stream, the movie's soundtrack also reignited the interest of the leader of Devo -- Mark Mothersbaugh.

The soundtrack was originally intended to just have Kinks songs on it but when Anderson and the studio allegedly couldn't secure the rights to all of the songs, Mothersbaugh, who worked with the director on his debut, Bottle Rocket, stepped in. Mothersbaugh composed the score and produced the soundtrack which featured The Kinks, John Lennon, Cat Stevens, Unit 4 +2, Faces, The Who, and Zoot Sims. The music compliments the quirkiness of the film and also helps you relive some scenes.
Posted by Salvatore Bono at 6:07 PM