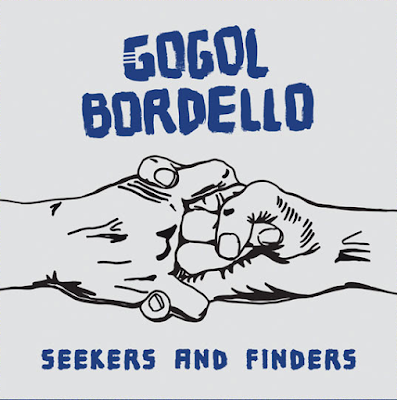 Gogol Bordello will release their new album, Seekers and Finders, in August. Take a look at the cover above.

In an interview with The Guardian, Liam Gallagher opened up about the split of Beady Eye for the first time since the band broke up in 2014. "The last album we put out, that was the first album I’ve ever put out in America when we only did one gig for it. That got under my skin. We got asked to do Coachella, but apparently we couldn’t afford to go out there. I was like: ‘I’ll pay for us to go out there and once we’re out there we’ll do some gigs,' he said. “Gem had hurt his head and I’d had my divorce, but the best place to be is on the road… Anyway, there were no gigs going down. So I thought to myself: ‘Maybe it’s just not happening, maybe it’s just not connecting.’ And then Andy got a call that he was gonna do his Ride thing, which was fine, but I thought: ‘You know what, I’m not sitting around.’ So I went: ‘Tell you what, go and do Ride and I think we should just call it a day.'”

Guns N Roses guitarist Richard Fortus said that the band are planning on making an album with Slash and Duff McKagen after they rejoined the band last year. He told StageLeft podcast: "We haven’t started recording anything, when I say that, as far as in the studio doing an album. We’ve been recording a lot of stuff, just ideas, assembling ideas, but not going into a studio and actually tracking a new record," he said. "It’s sort of too good not to happen at this point, that’s how I feel about it. This band is really a force right now, and I definitely hope that we do, and I think we’re all sort of counting on it, and we’re also planning on it.”

In an email to fans, Trent Reznor said that last year's Nine Inch Nails EP, Not The Actual Events, is part of a triology of EP's with the other two coming this year. The next is allegedly coming in July and the third will arrive in December. He said: "Did you know Not the Actual Events was the first part of a trilogy of related EPs that will be released about 6-8 months apart? Now you do."