The Libertines reunion may go on longer than anyone would anticipate. The band will release their third album, Anthems for the Doomed, in September and when asked by Reverend & and the Makers' John McLure for the BBC if Libertines going to make another record, all members of the band said "Yes," while Pete Doherty said: "As soon as possible."

Speaking to Italian radio station Citta Futura, Noel Gallagher was asked if he would ever reunite Oasis and the former member said: "Oh one, there's a one per cent chance it might happen, but I don’t think so."At least it has gone from zero percent when he has mentioned in the past.

Meanwhile, former Oasis frontman and Noel's brother, Liam, is reportedly working with Lee Mavers of The La's. A source told The Sun, "Despite all the madness and excitement that surrounds Liam's personal life, he has always been very serious about his music and doesn't want to be retired or left waiting for his brother to decide he wants to bring Oasis back. Liam and Lee share a lot of similar ideas about music and although Liam has had his fair share of success with his own self-penned songs, his voice and swagger combined with Lee's undoubted ear for a chorus could create something very special." Liam dissolved his post-Oasis band Beady Eye in the fall.

Glen Hansard will release his sophomore solo album, Didn't He Ramble, in September.

Meantime, Hansard's other project and first band, The Frames, released a surprise compilation album, Longitude, today. The album is available on streaming platforms and will be physically out later this month, features reworkings of classic hits like "Fitzcaraldo" and "Revelate" and features the new track, "None But I."

Hey! Ho! Let's Go! The Ramones will meet Archie in a new book that will be published later this year by Archie Comics. The comic book, Archie Meets The Ramones, was announced at Comic-Con over the weekend. Take a look at the cover, below: 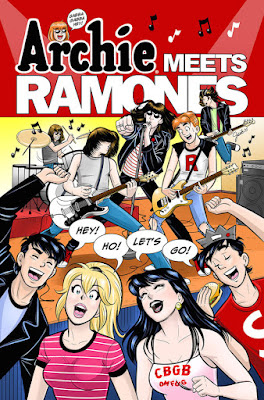