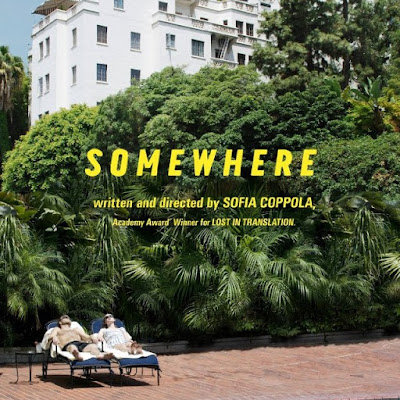 In 2010, Sofia Coppola released her minimal parenting odyssey Somewhere. The film, which starred Stephen Dorff as an A-list movie star trying to mend the relationship with his tween daughter and contemplate his career, was a film that gained mixed reviews. The film, which is mostly silent, showcased how distant yet, so close, the two main characters were. Coppola let the atmosphere and music do much of the talking.

The film featured a score from Coppola's husband, Thomas Mars and his band Phoenix. The soundtrack which was released features two Phoenix tracks as well as music from Foo Fighters, The Police, Julian Casablancas, T. Rex, Bryan Ferry, Romulo and others tells the story of the film through the song selection. While the soundtrack cover is the same as the movie poster, it echoes the same sentiment we feel in the summertime, a laid back and chill soundtrack for you to play while hanging out poolside.
Posted by Salvatore Bono at 5:11 PM