Speaking to BBC1 The Libertines discussed the making of their new album, which arrives in September. Pete Doherty said, "In a short period of time just before Christmas last year when Carl appeared out of the blue while I was having some treatment to curb my enthusiasms and we spent a bit of time together. We find ourselves picking up guitars at odd times, doing a few tunes and with Carl mucking about, we decided to make music at the end of it!" Carl Barat spoke about the reunion and burying the hatchet, saying, "It's been part of our friendship that we decided to make music again. We communicated through making music anyway."

After the death of Adam "MCA" Yauch, the surviving Beastie Boys members Adam "Ad-Rock" Horovitz and Michael "Mike D" Diamond said they would never make music together again using the name of the group. Now the duo have confirmed they will never perform live as Beastie Boys again either. The duo filed a trademark and patent application with the U.S. Patent and Trademark offices for the Beastie Boys name in conjunction with "live performances by a musical group." Pitchfork reached out to the band's rep for comment and said in a statement: "There will never be Beastie Boys live performances without Adam Yauch."

Kings of Leon have begun work on their seventh album. The band confirmed the news this week on SiriusXM and said they will work on the record in Nashville.

Former Gallows frontman Frank Carter's new band, Frank Carter and the Rattlesnakes will release their debut Blossom next month. Take a look at the cover: 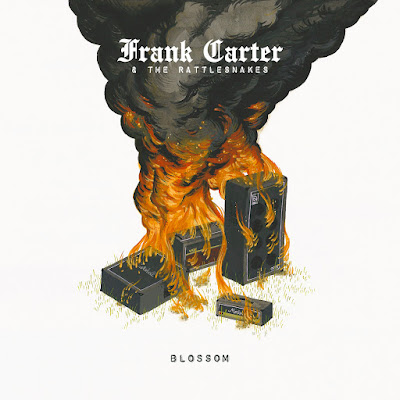 Posted by Salvatore Bono at 7:45 AM