Dave Grohl returned to the stage after breaking his leg during a concert in Sweden last month. The Foo Fighters celebrated their 20th anniversary at RFK Stadium in Washington, D.C., over the weekend and in a blowout concert, Grohl performed on top of a throne he designed. Watch Grohl explain how he came up with the idea, below:


Speaking of modern rock Gods, Damon Albarn was performing with Africa Express at the Roskilde Festival in Denmark over the weekend and had to get carried off the stage by security because he turned his headlining set into a five-hour ordeal! That's right, he performed for five hours and at 4 a.m., he was carried away, watch below:

Jack White's other band, Dead Weather, will release their new album, Dodge & Burn in September. It will be the groups first album in five years and third overall. Take a look at the cover, below: 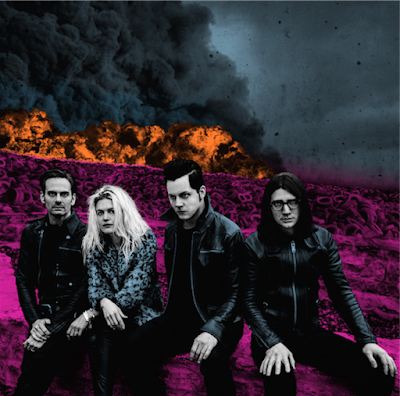 Posted by Salvatore Bono at 4:57 PM