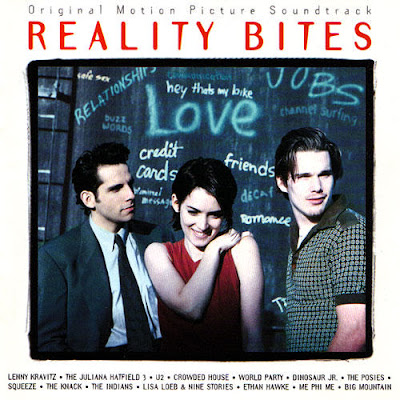 The 90s became the decade that gave us some of the best soundtracks that captured the feel of the decade as well as the film they represented. In 1994, Ben Stiller released the romantic comedy about Gen X called Reality Bites, the film chronicled a love triangle within the convoluted ideals of the decade. The soundtrack captured the characters relationships with each other and their enviroment.

Featuring music of the era like Lenny Kravitz, The Juliana Hatfield 3, Dinosaur Jr., The Posies, Lisa Loeb, Stiller also opted to go to the decade prior with hits from Crowded House, Squeeze and U2 to fill out what the intentions of his actors needed to embrace. The soundtrack still holds up and showcases a moment in time and a generation at a crossroads.
Posted by Salvatore Bono at 6:50 PM