Speaking to Vanity Fair, Bruce Springsteen said he plans on releasing an E-Street Band-less album in 2017.  He said: "It's a solo record, more of a singer-songwriter kind of record. Pop records with a lot of strings and instrumentation. So the record is somewhat in that vein."

Following their historic reunion at Riot Fest, Misfits' Jerry Only spoke to Rolling Stone about the possibility of new music with the classic line-up. He said: "I want it to continue. I know Doyle wants it to continue. I know Glenn wants it to continue. We just have to be big enough people to make it continue. And that's where we're at. Whatever it takes. We're going into our 40th anniversary so the timing couldn't be more perfect. Eventually, Doyle's got to write a new album; I've got to write a new album; Glenn's got to write a new album. Why don't we work together and make the greatest album ever? Now we've got different elements. We've got Doyle playing more of a metal kind of thing. We've got Dave who we're trying to figure out what the fuck he's doing. And Glenn's got his own thing. And Acey [Slade, second guitar] fills in good too. And I've got the band where it is today. So it's a matter of remolding and using all the different elements that I've got." The bassist added: "I think it's got to evolve naturally. The thing is we've tried to plan things and then we stand there and wait and as it comes we'll just do it. When we go back – I don't know about Glenn – but I canceled our touring and everything for this so I'm going to go home and write and lift."

Kid Cudi took to Twitter to announce that he is releasing a double album at some point this month. He wrote:

Hey! So im workin on a date for a release this month. Available on ALL PLATFORMS for streaming and download, physicals shortly after 🤘🏾🌹
— The Chosen One (@KidCudi) September 5, 2016

You will have this album this month in your hearts and your hands. New chapter, new energy, new levels.
— The Chosen One (@KidCudi) September 5, 2016


The Weeknd has said that his forthcoming album will be influenced by The Smiths, Prince, Bad Brains, Talking Heads and DeBarge. Speaking to VMAN he said: "The production feels aggressive but still sexy. The Smiths, Bad Brains, Talking Heads, Prince, and DeBarge play roles. We wrote it all in Los Angeles. I think it’ll be the best-sounding album I’ve ever done. It’s hard to label the sound because, when I first came out, nobody would label it R&B. I just want to keep pushing the envelope without it feeling forced.” No word as to when it will be released.

During an AMA on The Guardian's website, Fatboy Slim aka Norman Cook, was asked if The Housemartins would ever reunite. He said: "We agreed when we split up, in Bloom's Hotel, Dublin, 1988, that we would never reform. Five years ago we all had lunch together and reiterated that fact, with the caveat that we would only consider reforming if the Smiths reformed, which will only happen when the royal family abdicates."

Jimmy Eat World have been slowly letting out info about their new album, Integrity Blues, which arrives next month. The Arizona band have now released the cover of the record, take a look: 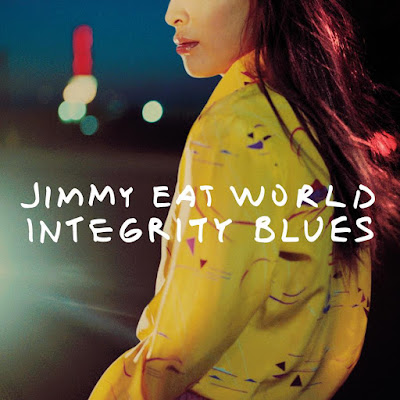