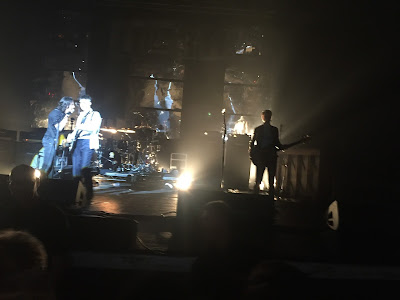 The Libertines at Unity Rocks, Brixton 7th September 2016
By James Bohrsmanm
As one frontman was carried from the stage by security, the second strode along refusing to be halted by the venue cutting the sound. He maintained the frenzy of the crowd as they finished the show for him, singing in unison for the final song.
It was The Libertines, of course. It was the band’s first official UK gig in over nine months and marked a triumphant return to their hometown of London. Carl Barat was unceremoniously escorted off stage while his partner in crime Pete Doherty remained to inspire the crowd through a triumphant finale.
Despite never reaching the mainstream heights that their talent perhaps merited, the four-piece have cemented a legacy in Indie Rock and they reminded the Brixton fans why this past Wednesday. On a warm September night in their hometown, The Libertines took their fans back to the early 2000’s and a late night gig in Camden. They reminded everyone of that raw energy and passion and they showed why they are one of the greatest British bands in recent years.
The connection between Barat and Doherty on stage was present as ever, with the two joyfully embracing between songs, laughing and talking before thundering into frantic guitar riffs which had crowd surfers being pushed away from stage by security. As always the performance was full of scuffed riffs and botched transitions, but with The Libertines it wouldn’t be the same without that. Towards the end another suitably entertaining missed transition between songs left a period of no music, before Doherty powered into ‘Don’t Look Back into the Sun’ and sent the crowd into another frantic few minutes.
They opened the show with ‘The Delaney’ followed by ‘Barbarians’, before picking up a favourite from their new album in the shape of powerful single ‘Heart of the Matter’. The set went into overdrive when the band hammered out the notorious opening to ‘Horrow Show’. Anyone who saw the band in the early days would remember this as the catalyst for many a destroyed venue around London – a song that encapsulates the raw and feverish beginnings of the band.
Barat was carried off stage shortly after the conclusion of the last song, before Pete returned alone to finish with an encore of sorts. The power was cut but with Doherty’s encouragement the crowd finished ‘Music When the Lights Go Out’ – a fitting finale given the situation.
Based on last week’s performance, The Libertines should sit atop any rock ‘n’ roll fans bucket list to experience live. The show served as a reminder that this raucous four-piece remain one of the world’s most entertaining bands. Oh to be a Libertine.
Posted by Salvatore Bono at 6:54 AM