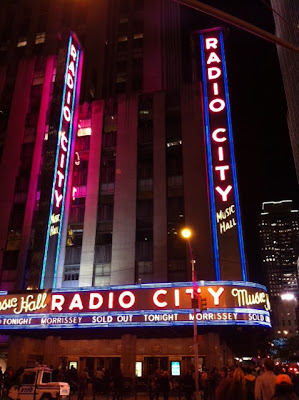 Last night Morrissey dreamt that somebody loved him, the King of Pain did have more than just somebody, he had a sold-out Radio City and the first of three nights in New York City (the second nights happen at Terminal 5) loving everything he did and said. On a tour where he just touring America, really for the sake of it, the voice of a generation of indie rock lovers was simply on fire from the get go.

As the stage dimmed and random words began to be heard over the PA system, words and phrases that ranged from “Adolf Hitler” to “Apartheid,” to “Free Nelson Mandela,” “Racist,” were projected. It was a bizarre and left-of-center way to get a crowd ready, but then again, this is Morrissey. Walking on stage at 9pm sharp, he and his band bowed together and took their places. Opening with “Last Night I Dreamt That Somebody Loved Me,” it was immediate that the 53-year-old singer has not lost his vocal touch. While the crowd went crazy with Morrissey opening with a Smiths song, especially after the speculation was denounced that the band would never reunite, it, like always, was evident that he still loves his old numbers, just not his former band. His band, who all wore the same uniform – a red T-shirt that said “KillJoy” across the chest, blue jeans and slick 50’s style haircuts, were simply on fire. They clearly are not The Smiths, but were great at mimicking the sounds that the legendary band crafted three decades ago. Morrissey, who was on The Colbert Report the night before, referenced the TV taping and asked the crowd how he did. He was much more personal, or as personal as he will get, with the crowd than I expected. At numerous times he reached out to those in the front row and shook hands and even spoke to an 11-year-old named Kyle, who was front row center, the singer seemed pleased that he was ushering in a new generation to his music, even if it was just one kid. Yet, in an ironic twist, a screen that featured Oscar Wilde with a cartoon bubble over his mouth that said, “Who is Morrissey?” was projected for a majority of the night.

As the night progressed, Moz stuck to cuts off his last studio album, Years of Refusal, and deep cuts of his solo career and even performed a new song, “People Are the Same Everywhere,” and snuck in a cover of Frankie Valli’s “To Give (The Reason I Live).”  While the songs sounded fantastic and he and the band fed off each other, it was cuts from The Smiths that, as expected, that got the most acclaim. Songs like “Shoplifters of the World Unite,” and “Meat is Murder,” which was accompanied by a brutal video of animal slaughtering, added more of a deep impact to the songs words. In the 90-minute concert, which featured a one song encore of The Smiths “Still Ill,” had his fans on the floor attempting to jump on stage and hug the man, but security nearly lost their heads trying to prevent that from happening. Morrissey seemed to embrace the fans, the singer, notorious for self-loathing appeared to love the idea that he is an icon and not matter what he does or says, his legion of fans will still come out and express their admiration. Morrissey Radio City Music Hall - 10/10/12 Setlist
Last Night I Dreamt That Somebody Loved Me
You Have Killed Me
The Youngest Was The Most Loved
You're The One For Me, Fatty
I'm Throwing My Arms Around Paris
Shoplifters Of The World Unite
Everyday Is Like Sunday
Ouija Board, Ouija Board
Black Cloud
Spring-Heeled Jim
People Are The Same Everywhere
Meat Is Murder
To Give (The Reason I Live)
Maladjusted
Let Me Kiss You
Speedway
I Know It's Over
One Day Goodbye Will Be Farewell
I'm OK By Myself